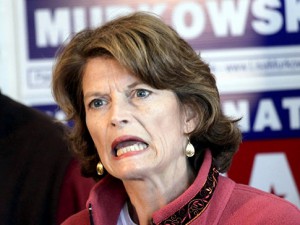 Alaska’s Senator Lisa Murkowski has put U.S. crude oil exports front and center of her policy agenda today in a speech at the Brookings Institution in Washington DC.

As Ranking Member of the Senate Committee on Energy & Natural Resources, Murkowski clearly has lifting current export restrictions in her sights.

The debate on crude oil exports, like that on natural gas (LNG) and coal exports, should be about climate change, as adding fossil fuel supply to the global market is exacerbating the climate crisis. As Oil Change International’s Executive Director Steve Kretzmann said this morning in a press statement:

“…the Intergovernmental Panel on Climate Change and the International Energy Agency warn, at least two thirds of existing proven global fossil fuel reserves need to be left in the ground.  Much of the resource that would be unlocked by lifting the crude export ban is in fact still unproven.  Lifting the oil export ban is simply climate denial in a new, and very dangerous, form.

The motivation behind industry calls for deregulated crude oil exports is to enable development of so far undeveloped oil reserves and increase production. This would add to oil reserves that we already cannot fully consume without destroying the climate. This added production would not enhance U.S. energy security or reduce energy prices, it is intended to raise prices and serve international markets. Without an effective regime in place to limit greenhouse gas emissions globally, deregulating U.S. crude oil exports can only exacerbate an already critical global climate crisis.

Lifting the export ban would be bad for the climate but also for U.S. consumers and communities. It would be bad for hundreds of communities across America that are facing the impacts of the fracking boom that has unlocked billions of barrels of oil. This is simply because exporting U.S. oil would increase profits for U.S. drillers and spur them to drill more.

There is perhaps no greater example of how out of control the boom is than the horrifying crude oil train accidents that are now becoming commonplace on North America’s railroads. 47 people lost their lives in Lac Megantic, Quebec last July and since then two more accidents, in Alabama and North Dakota have shown how dangerous America’s oil boom has become, and how, despite consecutive incidents, nothing is being done to prevent the next disaster.

While communities all over America pay the price and assume the risk of America’s oil boom, oil producers are once again trying to dupe the American public that they have the country’s best interests at heart. While the American Petroleum Institute (API) launches a new PR campaign touting a new era of “energy abundance”, the fact is that America’s oil boom is still millions of barrels short of meeting America’s consumption of oil, which has been on the rise again recently despite efficiency gains.

Before we get carried away with this energy abundance idea we need to get some things straight.

America is still consuming nearly 20 million barrels per day (bpd) of oil products while producing just over 10 million bpd of crude and other liquids.

This gap may never be bridged by increasing production.

By far the best way to bridge it would be to reduce demand for oil. The economic benefits of reducing demand far outweigh the benefits of exporting U.S. oil to the world and avoid the costs of both increasing local pollution and climate change that deregulating exports would incur.

America’s politicians must stop assuming that the only cost of oil is the price at the pump. Climate change, habitat loss, water and air pollution, destroyed communities and destroyed lives are all real costs of the North American oil boom, and they are rising. This spans the tar sands fields of Alberta, the fracked communities of Texas and North Dakota and the devastated small towns on the pipeline and railroad routes.

Exporting America’s crude oil so that oil companies can make more profits to fund more drilling would dismiss all of these externalities.  The Senate Energy Committee would serve the American people better by investigating the real costs of the oil boom and supporting technologies and policies that will substantially reduce America’s destructive addiction to oil.

Our report on US crude oil exports is here.