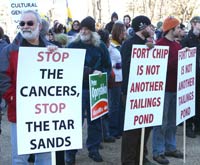 The Canadian press is reporting that the Albertan government is preparing to release new data “within weeks” about cancer rates in Fort Chipewyan, the First Nations community which is just under 300 kilometers north of Fort McMurray.

It was back in 2009 that the Alberta Cancer Board found that certain types of rare cancer were at elevated rates in the community, which is both downstream and downwind from the main tar sands operations.

The shocking statistic was that some cancers were occurring 30 per cent more frequently than the provisional average.

Local residents fear that the tar sands are to blame. “Even if government has new figures, that doesn’t answer the question everyone here is curious about,” Allan Adam, the chief of the Athabasca Chipewyan First Nation told the Edmonton Journal. “We need to know what is causing the disease.”

John O’Connor, the first doctor to go public with concerns about high cancer rates in the community in the mid-noughties, is one of two doctors serving native communities in Alberta’s northeast.  So outraged were the authorities when O’Connor first raised the alarm that they threatened to take away his license.

He is deeply concerned: “It is a dilemma for communities that are losing ground, literally, and losing touch with their culture”, he says. “In the end it is almost a choice of ‘Do I die by starvation or do I die by poisoning?’”

Another local doctor, who travels to the community for one week each month, believes that other studies need to be undertaken too, including baseline toxicity studies of water and local wildlife.

“People’s lifestyle is dependent on the water, and a large part of their diet is made up of duck, goose, moose, fish, deer and beaver. I am very concerned for them,” said Dr Esther Tailfeathers.

Others are also now calling for a full comprehensive cancer study for the First Nations community.

The elevated cancer rates are just one of the many dilemmas facing the First Nations as they grapple with the poisoned chalice of the tar sands.

As an article in the Vancouver Sun points out, the 1,200 community “is blessed and cursed by proximity to the world’s largest stash of bitumen: the people are simultaneously prospering – and in a life-and-death struggle to retain their culture.”

Just a few decades ago, over three quarters of the community lived off the land, but as the tar sands spread north it is “stifling” a traditional way of life. The lure of huge salaries in the oil patch is proving irresistible to some in the community, who talk about being between a “rock and a hard place”.

In Fort Chipewyan, the community elders are now running free workshops in traditional skills such as hunting and trapping in a bid to stop their culture dying.

But the First Nations have now found another global star who will support them in their fight against the tar sands.

Last week, singer Neil Young announced he is doing four concerts to help finance the First Nation’s legal challenges against expansion in the tar sands. The tour will be called “Honor The Treaties” to assist the Athabasca Chipewyan First Nation Legal Defence Fund.

Earlier this year, Young said in a speech: “People are dying of cancer because of this. All the First Nations people up there are threatened by this.”