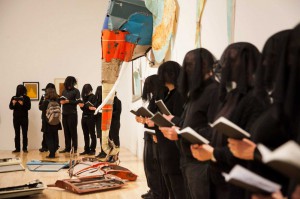 If there is one organisation that has done more than most to spin the dirty tar sands as responsible, dependable oil, it is probably the largest lobby group in Canada for the oil and gas industry, called the Canadian Association of Petroleum Producers, or CAPP.

At home, the oil and gas lobbyists have done much to downplay the devastating climatic impact of the tar sands, or its ecological impact, such as toxic tailing ponds, leaking cancerous chemicals, and other routine water and air pollution.

The daily struggle against the tar sands in Alberta for Canada’s indigenous communities is a far cry from the polished floors and serene atmosphere of the Canadian Museum of Civilization, which claims it is Canada’s most important museum of human history and the most popular and most-visited museum in Canada.

So it beyond irony that last week the Canadian Museum of Civilisation announced it was “proud” to have struck a sponsorship deal with none other than CAPP. Mark O’Neill, CEO of the Museum called CAPP’s sponsorship “a shining example of a private and public partnership”.

In contrast, John Bennett, Executive Director of the Sierra Club in Canada, said the deal was part of “probably the biggest propaganda campaign in the history of the country.”

For years, the wonderful artists and activists from the London-based organisation Platform have campaigned against how oil money influences the arts.

As Platform pointed out yesterday: “It’s easy to see why this will be a PR coup for CAPP … The companies desperately need the social licence to operate that association with prestigious arts institutions can bring, especially at a time when Canadian public opinion and international attention is being drawn to the Indigenous Rights violations and ecological devastation of Canada’s tar sands.”

Even more compromising for the Canadian Museum is that, in previous exhibitions, CAPP “had exerted pressure to alter exhibit content they felt treated the industry too harshly”, note Platform. Will this happen again?

Oil Sponsorship our our cultural institutions is not just happening in Canada.  The iconic Tate Britain in London has been subject to a long-running campaign by activists due to the fact it accepts sponsorship from BP.

Late last month fifty veiled activists dressed in black performed an art installation, entitled “Parts Per Million,” throughout a series of rooms in the “BP Walk Through British Art” at Tate Britain during the art gallery’s official re-opening.

One of the performers, Fiona Edwards said that “Any celebration of British art that prominently bears the BP logo is also endorsing that company’s business model which explicitly involves the destruction of a safe, liveable climate.”

Meanwhile, also last month, a group of artists, musicians and authors who have performed at London’s Southbank Centre signed a letter calling on the Centre to drop Shell sponsorship on the 18th anniversary of the execution of Ken Saro-Wiwa and the Ogoni 9. They expressed their concern about the reputational damage being caused to the Centre through its long standing association with the controversial oil company.

Although these cultural institutions argue that oil companies give them badly needed funds, they also have to accept that by accepting oil money they are becoming complicit in the problems caused by tar sands, including climate change.

They also face a growing protest movement. One indigenous activist, Clayton Thomas Muller, has called on First Nations communities across Canada to join him in rejecting oil industry sponsorship deals: “We must end corporate sponsorship of our arts institutions by these genocidal corporations…they bring death, cancer and destruction to our people, land and water in all places they operate,” he argues.