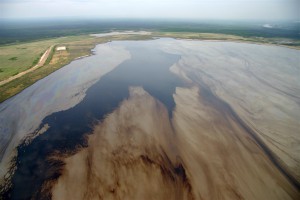 And so yet another UN climate conference has ended, having limped to late-night compromise deal that has been widely condemned by civil society groups as vague and inadequate.

During the conference, Oil Change International launched a new graphic about how much carbon we can safely burn. The neat graphic explains in plain English that “When it comes to climate change and fossil fuels, the world is in a hole, and the first order of business must therefore be to stop digging deeper.”

It adds that “Scientists agree that at least two thirds and possibly more of the world’s current, proven reserves of oil, gas, and coal must not be burned if we are to avoid the worst impacts of climate change.”

The reality is that less than a third of the remaining reserves can be safely burned.

Tell that to the Canadians who are digging one huge hole in Alberta as they exploit the tar sands. In doing so, they are burning carbon like it was going out of fashion.

They are developing the tar sands at an alarming rate: pouring in some C$19 billion investment a year. The tar sands production is expected to surpass 2 million barrels a day this year.

Earlier this month, the respected Pembina Institute issued a report on the long-term economic implications of rapid tar sands expansion in a report called Booms, Busts and Bitumen which looked at the economic consequences for the Albertans and Canadians of being so dependent on a resource that many never be able to be burnt.

As David Emerson, chair of the Alberta Premier’s Council for Economic Strategy, has noted, Canada “may have heavy oil to sell, but few or no profitable markets wishing to buy.”

The industry also seems indifferent to the immediate ecological impact. Such is the growth of the tar sands, that the industry is running out of room to store the contaminated water that is a by-product of the process used to turn bitumen into oil.

According to a new analysis by the Pembina Institute by the early 2020’s, one month’s output of wastewater could turn an area the size of New York’s Central Park into a toxic reservoir 11 feet deep.

Now the tar sands industry wants to transform northern Alberta into the largest man-made lake district on Earth. As many as 30 pit-end lakes are being planned. Syncrude has already begun work on the 2,000 acre Base Mine Lake. Other companies are planning on flooding oil mines with toxic tailings and water.

The tailings plans have been described as “reckless” by the Pembina Institute. One scientist, David Schindler, an ecology professor at the University of Alberta, accuses the industry of “playing Russian roulette with a big part of an important ecosystem.”

That is as well as playing Russian roulette with the climate.