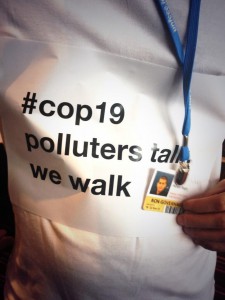 Enough is enough. Yesterday having had enough of participating in the charade of the UN climate talks in Warsaw, hundreds of environmental and development campaigners finally walked out of the meeting.

Activists are angry at the slow pace of progress as yet another COP goes past without substantial progress being made.

“Movements representing people from every corner of the Earth have decided that the best use of our time is to voluntarily withdraw from the Warsaw climate talks. This will be the first time ever that there has been a mass withdrawal from a COP,” said a WWF spokesman. “Warsaw, which should have been an important step in the just transition to a sustainable future, is on track to deliver virtually nothing. We feel that governments have given up on the process.”

“Governments are not doing enough,” added Oxfam’s Celine Charveriat. “We need to tell them you are not allowed to make a mockery of this process. We can’t continue to watch in silence. Enough is enough.”

Warsaw was only ever meant to be a staging post on the way to the main conference in Paris in 2015, but the signs are not looking good. As Graham Readfearn writes in the Guardian: “Even though Warsaw is a ‘stepping stone’ to a possible new global climate deal to be agreed in Paris in 2015, the steps so far seem to be backwards or sideways.”
Readfearn, like many others, writes of a growing chasm between “the near unanimous pledge to keep global warming below 2C and the ability of current policies to achieve the goal.”

Every day the science is screaming at us that radical action is needed. Today’s alarm bell is that sea-level rise in this century is likely to be 70-120 centimetres by the end of the Century if greenhouse gas emissions are not mitigated.

Given the threat and urgency, why the political inertia?

The bottom line is that the ability of current policies to achieve meaningful climate action is being undermined by the fossil fuel industry. As it has for the last 20 years. As it has been for every UN climate meeting.

Hoda Baraka, global communications director for 350.org, said they walked out of the talks because lobbying from fossil fuel companies was undermining progress at the talks.

“It has become quite flagrantly obvious that progress to reach any legally binding climate treaty is being obstructed by the lobbying forces of the fossil fuel industry. As we can see from this COP, they’ve had a very strong presence before and during.”

It has even many of the same scientists or think tanks to sow doubt and confusion.

If you need to read more, try Jerry Leggett’s book Carbon War, which documents the fossil fuel industry’s attempts to undermine the UN process in the nineties, or Naomi Oreskas and Erik Conway’s wonderful Merchants of Doubt, or James Hoggan’s gritty Climate Cover-up.

Log on to Greenpeace’s amazing Exxon Secrets database to see how Exxon funded many of the groups that have undermined climate science or read their great reports exposing the Koch brothers for their funding of the climate denial movement.

The bottom line is that the political stalemate is due to the fossil fuel industry.

This was already well known.

What was not known until this week was that the climate crisis has been caused largely by just 90 companies – such as Chevron, Exxon, Shell and BP –  which between them have produced nearly two-thirds of the greenhouse gas emissions generated since the industrial revolution.

We need to exclude the villains from the climate process.

And for that we need to learn from tobacco.

In the mid-noughties, WHO Framework Convention on Tobacco Control (WHO FCTC) came into force.

The convention warned of the  “fundamental and irreconcilable conflict between the tobacco industry’s interests and public health policy interests.”

Article 5.3 of the FCTC stipulates that: “in setting and implementing their public health policies with respect to tobacco control, Parties shall act to protect these policies from commercial and other vested interests of the tobacco industry in accordance with national law”.

To that end, yesterday, over 70 organisations from across global civil society released a letter calling on the United Nations to implement new rules to safeguard the global climate talks from the undue influence of the fossil fuel industry.

The letter talked about implementing an Article 5.3 for the fossil fuel industry.

If the UN is serious about fighting climate change, it has to take this necessary step. Not tomorrow, but today.