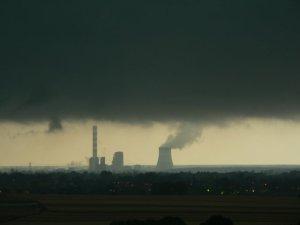 Irony: On the one hand you have the Polish government hosting the UN climate talks in Warsaw, where the talk is all about the emerging climate crisis being driven by fossil fuels.

On the other hand, the Polish government is pressing ahead with building a $3.7 billion dirty coal plant which may never be profitable.

Work may start on the plant as early as next month, hardly before the ink is dry on any climate agreement.

PGE SA, the utility company which is majority-owned by the Polish government, has been told to expand the Opole coal plant in the south west of the country, to boost the amount of Poland’s electricity generating capacity.

The plant will gobble up an astonishing 6 million tons of coal a year. That in turn will produce one huge amount of carbon dioxide.

And at a time when European leaders are being urged to de-carbonise their economies, and many countries are subsidizing renewables, the new coal-fired plant will be the biggest power project in Poland since the fall of communism in 1989.

As well as making no sense for the climate, many analysts are also worried about whether the economics stack up too. “Opole is a very, very risky investment,” argues Marek Buczak, one Warsaw-based fund manager.

Grzegorz Gorski, head of Paris-based GDF Suez SA’s operations in Poland, told Bloomberg that it “makes no economic sense to build any type of conventional power plant today”, due to subsidised renewables. “With subsidized renewable output, power-plant operators are mostly burning money in their generators as it’s difficult to cover any type of costs,” he argues.

The decision to press ahead with Opole, combined with the fact that the country relies on dirty coal to produce 87 percent of its electricity, had consistently raised questions about Poland’s suitability to host this year’s climate talks. Indeed Poland has the largest reserves of coal in Europe and is the country most addictive to coal.

Some activists have even gone as far as calling the country Coaland. Indeed, as if to ram home its coal-loving credentials, next week to coincide with the climate talks, Poland is hosting a two-day conference on coal. It is being organised by the World Coal Association, with the “endorsement” of Poland’s Economy Ministry.

And last month, the Poles posted a blog on the website for the climate meeting, which argued that due to the melting Arctic, “we may also build new drilling platforms and retrieve natural resources hidden below the sea bed”.

It is not surprising that the host nation is being consistently criticised by NGOs:  “Polish decision makers are complicit in speeding up the Arctic melt and slowing down efforts to reach a global climate deal,” argues Maciej Muskat, director of Greenpeace Poland.

It does not bode well for any meaningful climate deal.