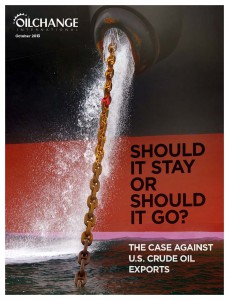 Three weeks ago we revealed in a report the details of the American oil industry’s plan to export U.S. crude oil as a means to increase its already massive profits.

We discussed how this push was mostly going on behind closed doors and in the rarefied air of Washington think tanks and lobby offices.

According to a legal expert quoted in the piece, the strategy would require a “country claiming harm from the restrictions (…) to bring a case before the (World Trade Organization).” He went on to explain that, “a country would likely have a strong case that the U.S. restrictions do violate trade rules.”

Our report showed that the EU has expressed interest in putting U.S. crude on the agenda of a free trade agreement called the Transatlantic Trade and Investment Partnership, currently being negotiated.

The Bloomberg story puts the API and a number of industry leaders, such as Romney campaign donor Harold Hamm, on record as supporting the unregulated export of U.S. crude oil. Would the API go so far as to work with foreign entities to bring a case against the United States?

The crude oil export regulations date back to the mid-1970s when, following the Arab oil embargo, the Energy Policy Act was enacted to improve energy efficiency, create the Strategic Petroleum Reserve and keep U.S. produced oil inside the North American market. Export licenses can be issued for exports to Canada as long as the oil is refined in Canada and these have been on the increase lately, doubling from January to February to over 120,000 barrels per day.

A number of issues need to be made clear about the drivers behind and impact of deregulating U.S. crude oil exports.

First, America is not producing, or about to be producing, more oil than it consumes. If we look at the latest EIA figures, from August 2013, America imported more crude oil then it produced – 7.5 million bpd compared to just over 8 million bpd of imports. While U.S. oil production is growing rapidly, it is unlikely to meet consumption levels for some time if ever, unless demand is dramatically reduced.

So the driver for U.S. crude exports is not about there being a surplus of U.S. oil in the market. It’s about American oil producers wanting to fetch higher prices and make more money.

American oil is restricted to the North American market by the export regulations. But because much of the oil being produced in America is of a particular quality, (it is light and sweet, or low density and low sulfur), its value in the U.S. refining market, a market configured for a wide range of crude oil qualities, is reduced.

If American oil could be exported to the world its value would immediately increase. This would end the WTI-Brent differential or ‘spread’, which has plagued the North American oil market since 2011. The spread is the difference between the U.S. benchmark oil price (WTI) and international benchmarks (Brent). Crude exports may well raise gasoline prices too as these have been flattened recently by both declining demand and building stocks of both oil and gasoline.

CHART:  U.S. crude (WTI and Bakken) have been trading at a discount to international crude (Brent) for over two years.

The impact of lifting the crude oil export ban would make tight oil (fracked oil primarily from North Dakota and Texas) producers and tar sands producers in Canada a lot of money. It would raise the price they get for their oil significantly.  Tar sands producers would gain because tar sands oil is priced against America’s WTI benchmark.  If the WTI price goes up, the price of tar sands rises with it.

That price rise will have a devastating impact on efforts to stabilize the world’s climate because those efforts depend on leaving the vast majority of the world’s fossil fuels in the ground.

This has particular salience in North America because North America (U.S. and Canada) is home to billions of barrels of unconventional oil. Unconventional oil, such as the tar sands and tight oil resources obtained through fracking, are expensive to produce. The profit margins are slim and raising North American oil prices will enable producers to access and produce much more of these resources than they would if prices remain relatively low.

The Intergovernmental Panel on Climate Change (IPCC) and the International Energy Agency (IEA) among others, have confirmed that to keep climate change under the already dangerous 2 degrees Celsius level, at least two thirds of the world’s proven fossil fuels must be left in the ground. We simply cannot burn all the oil, gas and coal we already have without increasing the levels of greenhouse gases to dangerous levels.

Deregulating U.S. crude oil exports would not be in America’s or the world’s interest. It would make fracking and the tar sands even more profitable than it already is and enable the industry to go into ever more marginal reserves to produce more of these extreme oils.

The oil industry has only one interest, profit. Exports would increase profits and incur even more damage to our climate, as well as the land, water and air in the communities where this extreme oil is being produced.

When the United States is considering energy regulations, the main driver should be the health and safety of its people, not the profits of a greedy industry. Deregulating crude oil exports would be a move in the wrong direction.