For too long, the goal of many climate advocates has been to simply get our leaders to recognize that climate change exists. This is not to say those efforts weren’t and aren’t necessary; unfortunately they were and continue to be, in large part due to a massive misinformation campaign by the oil industry. But now the impacts of climate change smack us in the face every day and it is simply not enough to accept the science of climate change and leave it there.

It’s no longer enough for our leaders to merely make overtures to the science behind how a greenhouse works. Stopping after saying climate change is real won’t get us the change we need. Paying lip service to climate science and then running full speed ahead down the fossil fuel pathway to climate chaos is just another form of climate denial.

We need our leaders to wake up and make some hard choices, commensurate with the difficult climate reality we face. What do those actions look like? We’ve got a few ideas… 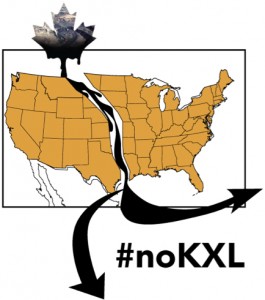 Not only does the Keystone XL pipeline have a huge climate cost associated with it, but rejecting it would mark a key turning point in our nation’s energy dialogue. For the first time, climate change would be front and center in a national decision of such significance. Rejecting the Keystone XL pipeline would send a hugely important signal about the direction this country needs to head in.

Stand up to Dirty Energy Money.

Big money is corrupting our democracy and the fossil fuel industry is one of the biggest perpetrators around. Every year, the fossil fuel industry gives millions in campaign contributions to political candidates and spends millions more in lobbying in Washington and state capitals around the country. It’s time to take back our democracy from dirty energy money and make our representatives actually represent the 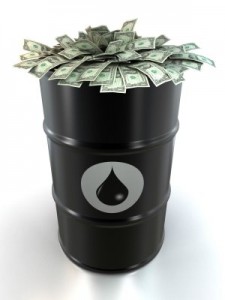 people who voted for them – not the ones who bought their campaigns. A first step is to stigmatize fossil fuel industry dollars, just as big tobacco money was run out of Washington in years past. After all, Big Tobacco was threatening our health… and now Big Oil, Gas and Coal are doing the same on an even bigger scale.

As mentioned yesterday, the US government provides some $14 billion in fossil fuel subsidies each year. That’s $14 billion dollars going directly towards fueling the problem rather than the solution. They need to end, plain and simple, if we are to truly tackle climate change with seriousness anywhere near the scale of the problem. 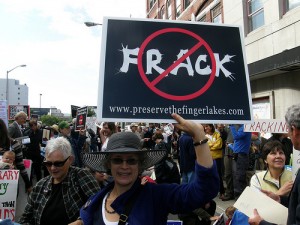 Stop fracking for oil and gas.

Fracking is harmful on a local level due to its impact on water and air quality, but also harmful on a global scale by opening up new fossil fuels that we cannot afford to burn, and unleashing untold amounts of methane, a hugely potent global warming pollutant.  The Obama administration and members of Congress must give up their unfounded infatuation with natural gas and fracking for more oil.

The Obama Administration has a key opportunity to move in a new direction. They must stop fracking on public lands. You can join the call by sending a comment into the Bureau of Land Management here.

Whether its oil exploration in the Arctic, drilling off the shores of our coastline, blasting out the sides of our mountains, or digging up the tar sands, the latest extreme crop of fossil fuels need to be abandoned. With the International Energy Agency warning us we already have far too many fossil fuels in our existing reserves than we can afford to burn, there is simply no rational excuse to pursue such destructive means to get new fuels we can’t afford to burn in the first place.

In our efforts to move in a new direction and to stop denying the realities of climate change, we must never forget the role the US plays in the broader international context. One major way we can help is to fund solutions to climate change through our 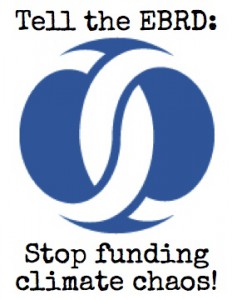 development support, rather than continuing to fund the problem.  President Obama announced plans to end US public financing of coal plants abroad, which is an important step if fully implemented, but there are many other places where a sustainable and pro-poor shift away from fossil fuel development must be achieved.

And right now, the European Bank for Reconstruction and Development is considering such a shift. They just released new guidance on lending that, while talking a good game in moving away from fossil fuels, leaves the door open to simply continuing the status quo. And despite the name, the US actually contributes more than any other single country towards the finances of this Bank.

There’s an opportunity RIGHT NOW to provide comments pushing the EBRD to truly move in a new direction. Add yours now.

Support real solutions, not the problems that got us here.

Barack Obama’s climate action plan has a lot of good steps, as discussed yesterday. Regulating power plant carbon pollution, increasing fuel efficiency standards, pursuing greater investment in renewable energy, increasing efficiency in buildings… these are important steps and need to be implemented. But they are only steps. A truly comprehensive climate plan will put a price on carbon pollution that truly incentivizes the transition away from dirty fuels and towards a sustainable future. And we must play a more proactive and positive role on the international level to find a truly fair, ambitious, and effective global climate change solution. For if you truly accept the science of climate change, there is no other choice.

The good news: We can do this.

Climate change may be daunting, and the impacts that we are seeing every day are terrifying. But as scary as it may be, we simply can’t afford to remain in denial about what’s really necessary to stave off the unimaginable. It’s time to be real: those pushing “All of the Above” energy plans are the latest climate deniers.

But the good news is we’ve stared down challenges in the past and we can do it again. We’ve stood up to bullies before, and we surely can beat back Big Oil, Gas and Coal if we get serious about it. And the solutions are out there – renewable energy continues to grow, the public is clamoring for bold action, and we know we can get there. What we really need is not “all of the above” but the BEST of the above. 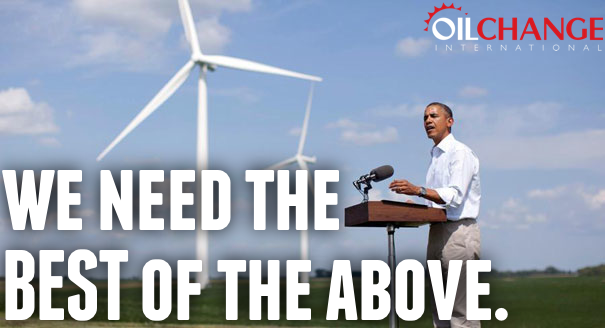 In a recent public forum on climate change, Gopal Dayaneni of Movement Generation remarked of our current situation, “Somehow it’s easier to envision the end of the world than the end of this economy.” Unfortunately, at this moment, he’s right… but we need to prove him wrong.

What it comes down to is that our leaders must act like actual leaders. We can’t afford to call “All of the Above” anything except what it is: climate denial. Anyone who chooses to remain in denial needs to pull their heads out of the sand, or get out of the way. In this case, actions truly speak louder than words.

As for us, we’ll be watching in the weeks and months ahead as the Obama administration implements their climate action plan and Congress comes back from recess. And we won’t hesitate to call out the latest crop of true climate deniers when we see them… and we don’t just mean those who don’t understand how CO2 works.