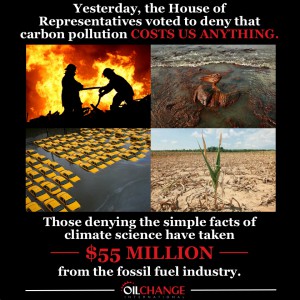 This past Spring the Obama Administration took an important (and little reported) step towards more aggressively addressing climate change. They increased the social cost of carbon.

Climate deniers in the House of Representatives have started to realize the full implications of this decision and, true to form, aren’t happy about it. Yesterday they did their best to unravel the Administration’s important step forward, voting 234-178 to prevent the EPA from considering the cost of carbon pollution in their work.

The vote was largely symbolic – needing Senate approval and the President’s signature to go into effect – but the industry money lining our elected leaders’ pockets is all too real. Representatives voting to reduce the social cost of carbon to zero have received a total of $55 million dollars over the course of their careers. This is nearly 5 times more than those siding with science and the millions of americans already feeling the impacts of climate change.

Yesterday the House blatantly voted against the interests of the American public and until we get Big Oil’s money out of our democracy, they’ll keep doing it.