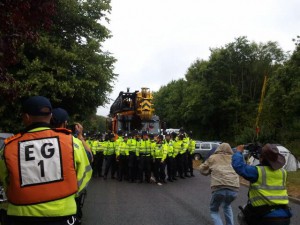 We know that policy makers live in a vacuum, alienated from the real world. Often they make decisions, not on scientific or expert-based evidence, but political expediency.

In the UK, for example, the Conservative government has signalled that fracking is going to be a key proponent of our energy policy for the foreseeable future.

They have given lucrative tax incentives to make this happen.

The reason this is happening is simple: British politicians have looked enviously at America’s fracking revolution and believed, naively, that the same could happen over here.

The flaw in this thinking is all too apparent to anyone outside the sphere of influence of the oil industry.

Britain’s geology is different to the US. Britain is a tiny island, with a much greater population density than the US. The majority of rural Britain has a centralised water system that if contaminated could affect millions of people at a stroke.

The concept of millions of Britons living next to fracking wells and not fighting for their countryside is now looking politically stupid. So far the Department for Energy and Climate Change has issued 176 licences to explore for both conventional and unconventional oil and gas across the UK.

Each one of these looks likely to be resisted and fought by the local community. First up is the conservative residents of Balcombe in West Sussex. They are making national news by showing the way in community resistance against the energy company Cuadrilla, which also has fracking interests in the North West of the country.

Balcombe is but the first of many.  Even the voice of the Conservative party in the UK, the Daily Telegraph, warns today that “villages across the UK take up the fight against fracking.”

The paper states: “The grassroots protests in the village of Balcombe against fracking have sparked a countrywide rebellion as villages up and down the country vow they will also blockade any attempts to drill.”

Britain’s politicians love to talk about evidence-based policy, but then are ignoring the latest evidence showing water pollution from fracking.

They are also ignoring the other fundamental flaw about fracking: this is not a precise technology, it is not a precise science. Methane, the most potent greenhouse gas, will leak. The more methane that leaks the more unsustainable fracking becomes.

Anyone concerned about fracking should read an Op-Ed in yesterday’s New York Times by Anthony Ingraffea, a Professor of Civil and Environmental Engineering at Cornell University who is the president of Physicians, Scientists and Engineers for Healthy Energy, a nonprofit group.

It is worth noting what he says as Ingraffea is a longtime oil and gas engineer who helped develop fracking techniques for the Energy Department.

He is concerned about leaking methane. “I can assure you that this gas is not ‘clean’”, he writes. “Because of leaks of methane, the main component of natural gas, the gas extracted from shale deposits is not a “bridge” to a renewable energy future — it’s a gangplank to more warming and away from clean energy investments.”

Ingraffea points out that recent measurements by the National Oceanic and Atmospheric Administration at gas and oil fields in California, Colorado and Utah has found leakage rates of 2.3 percent to 17 percent of annual production. This is a range, he argues that he and his  colleagues at Cornell and predicted some years ago.

And here comes the rub. He points out that a 2011 study from the National Center for Atmospheric Research concluded that unless methane leaks can be kept below 2 per cent, shale gas has no climate advantage over coal.

This is something we have covered on the blog before too.

David Smythe, an Emeritus Professor of Geophysics, University of Glasgow, also believes that fracking could lead to methane leakages: “I have found no authoritative study of the UK that mentions the fault seal problem in connection with horizontal fracking … A leaky fault is a fast-track back to shallow groundwater and to the surface for methane and other gases, as well as (perhaps) for the contamination of water resources by fracking chemicals.”

Smythe is now arguing that before we undertake further fracking in the UK, we need to assess the risks of water contamination and methane leakage.

We have no idea of the leakage rates of fracking wells in the UK.  The first questions someone should be asking Cuadrilla before it allowed to fracking in Sussex or anywhere else is what are your methane leakage rates?

I bet they won’t be able to tell you. They can’t tell you, because they don’t know.

Anthony Ingraffea finished his New York Times piece by arguing that “Policy makers need to listen to the voices of independent scientists while there is still time.”

Indeed they do. And the scientists are warning that because of Britain’s fracking frenzy, we could be heading for climate chaos.