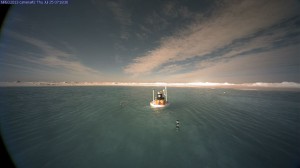 Scientists have been warning for years that due to climate change the North Pole might soon be ice free in the summer, well, guess what, today there is a pond there.

July and August are the melting months in the Artic, leading to record ice loss measurements which are normally recorded in September. But the melting could be happening faster this year.

Images taken yesterday and today from the wide-angle camera on a weather buoy maintained by the North Pole Environmental Observatory, show a foot-deep lake instead of ice at the North Pole.

The enclosed picture of the melt-water lake started forming earlier this month is taken today. It has formed following two weeks of warm weather in the Arctic, which has led to temperatures some 2 to 5 degrees Fahrenheit (1 to 3 degrees Celsius) higher than average in the region, according to the National Snow & Ice Data Center.

The pond is not sea-water, but melted ice water resting on thinning ice underneath. The melting is expected to get worse  over the coming week, as an expected Arctic cyclone will further erode the ice.

The trends are not good. According to the National Snow and Ice Data Center during the first two weeks of July ice declined by 132,000 square kilometers each day, which is 61 per cent faster than the average rate of decline over the past three decades.

If this is not worrying enough, scientists are now warning that rapid thawing of the Arctic could trigger a catastrophic “economic timebomb” which would as much as $60 trillion.

The warning flips conventional thinking on its head: for years governments have seen the melting Arctic as an economic boom allowing further exploitation of oil and gas and faster shipping between Europe and Asia.

But for decades scientists have also been warning about how vast quantities of frozen methane trapped in the tundra and under the ocean could wreak havoc on the climate, if the methane escapes to the atmosphere.

Now scientists have tried to quantify the economic damage that would be caused if vast tracks of the methane are released by the warming of the East Siberian sea. They put the price tag at somewhere between $60 to 70 trillion.

“This massive methane boost will have major implications for global economies and societies. Much of those costs would be borne by developing countries in the form of extreme weather, flooding and impacts on health and agricultural production,” argues Professor Peter Wadhams, head of the Polar Ocean Physics group at Cambridge University and one of the authors of the paper published in the journal Nature.

“It’s not just important for polar bears, it’s important for societies and global economies,” adds Professor Gail Whiteman of Erasmus, another of the paper’s authors. “That is an economic time-bomb that at this stage has not been recognised on the world stage”.