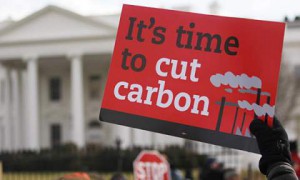 As the Canadians continue to lobby hard for the Keystone XL pipeline, maybe they should read a new report from the respected Potsdam Institute for Climate Impact Research, which reveals that sea levels could rise by 2.3 metres for every degree Celsius increase in global temperatures.

Anders Levermann, a scientist from the Institute, tells Reuters that “In the past there was some uncertainty and people haven’t known by how much. We’re saying now, taking everything we know, that we’ve got a robust estimate of 2.3 meters rising sea per degree C of warming.”

So just one degree warming could mean catastrophe for many low level countries such as Bangladesh, regions such as Florida, or islands such as those in the Pacific.

Reuters also quotes David Vaughan, head of the Ice2sea project, which was formed to narrow down the uncertainties surrounding melting ice and sea level rise, who argues that sea levels could rise anywhere between 16.5 and 69 cm this century, under a scenario of moderate global warming. And warmer seas, he argues, will bring more storms and more damage. It is that simple.

The Canadians should then read a devastating critique of the tar sands in the latest version of Scientific American, entitled “Oil Sands May Irrevocably Tar the Climate”.

The article quotes Myles Allen of the University of Oxford who argues that to avoid the two degree C warming threshold, we need not to exceed our so-called carbon budget, which is an estimated one trillion tonnes.

Allen calculates that we will reach our trillionth tonne sometime around 2040. Even to stay on budget for this deadline, emissions must drop by 2.5 per cent a year, starting now.

The article also quotes another scientist, John P. Abraham of the University of St. Thomas–Minnesota, who argues that if the tar sands are fully developed, they could result in roughly 0.4 degrees C of warming.

I know there is real uncertainty about how much of the tar sands will be developed. It depends of many factors, one at least of which is the Keystone XL. But it also depends on the oil price, as much as anything else. And given all this uncertainty, any calculation has to be taken with a pinch of salt.

This said, here is a crude back of the envelope calculation: If one degree warming equals 2.3 metres sea level rise, 0.4 degrees warming from the tar sands could lead to a one metre sea level rise.

If Keystone is the key to the next phase of the development of the tar sands, it is key to unlocking carbon we cannot afford to burn.

It goes without saying that a one metre sea-level rise could be catastrophic for America, let alone other parts of the world.