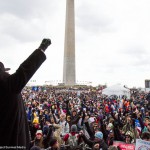 …our national interest will be served only if [Keystone XL] does not significantly exacerbate the problem of carbon pollution.  – Barack Obama, June 25th

President Obama’s speech on climate change at Georgetown on June 25 made this much clear: he will evaluate the Keystone XL tar sands pipeline based on its climate impact.

Thank you Mr. President. That’s all we ever asked.

So will Keystone XL significantly exacerbate the problem of carbon pollution? Most of my fellow Keystone opponents are amassing the evidence that it would, but the pipeline’s supporters say no, and their reasoning is worth examining. Keystone proponents do not deny that that tar sands oil it would carry is more carbon intensive than conventional oil. What they argue instead is that even without Keystone XL, the Canadian tar sands will be developed anyway, and delivered to market by other pipelines or trains.

Industry observers, whether pro, anti or neutral on tar sands, don’t really believe this.  The reason the governments of Canada and Alberta have lobbied so hard for the pipeline is that without it, producers are losing billions of dollars, and other delivery methods are either too small, too controversial or too expensive. The reason it is desirable for Big Oil is the very same reason it is a climate catastrophe: Keystone XL is the linchpin infrastructure for the reckless expansion of the tar sands. That is why tar sands producers want it badly, and why climate activists have prioritized stopping it.

Yes there are other pipelines, and stopping Keystone won’t magically reverse climate change. But for tar sands, like carbon itself, quantity matters. Less is better.

The suggestion that Keystone is not relevant to climate comes down to this: Tar Sands expansion exacerbates climate change but there is nothing we can do about it, because the production of fuel from bitumen will expand one way or another. It is as if there is a magical force pushing tar sands out of the ground without any human agency. It is a defeatist, pessimistic, and depressing outlook that suggests climate action is futile.

Surely Mr. Obama cannot believe this, or he would not even bother to tackle carbon emissions as he now has done. To approve the pipeline, the President would have to find that the US, the largest market for tar sands oil, is powerless to affect future production.

If Keystone XL, which would carry over 800,000 barrels per day of the world’s highest carbon liquid fuel, does not qualify as significantly exacerbating carbon pollution, it is hard to imagine what would. It is as relevant to climate as the tar sands mega-mines that produce the stuff it carries.

The next phase of the Keystone debate will focus on whether Keystone will facilitate the expansion of the Alberta tar sands. This is not a scientific argument but a business and economics question. There is no way to answer that question with absolute certainty, no lab experiment or computer modeling that will can give absolute proof. But the industry consensus is that Keystone XL is the one project that will unlock more high carbon fuel than any other.

To stop the expansion of tar sands and other dirty fuels, we must not continue to build infrastructure that locks in dependence on those dirty fuels for decades. Doubling down on dirty oil dependence will certainly significantly exacerbate carbon pollution.  The President, I believe, having taken a step forward on climate at Georgetown, will not take two steps back by approving Keystone XL.