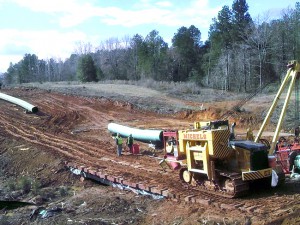 You would have thought that the political and economic stakes were so high for the oil industry and KXL that the industry would have been promising state of the art technology in the building and operation of the pipeline.

But there is a great Bloomberg news report which reveals that, although TransCanada says they will build the safest pipeline ever, the company is not going to use cutting –edge anti-pollution technology

“There are lots of things engineering-wise that are possible, that the industry doesn’t do,” Carl Weimer, the executive director of Pipeline Safety Trust, a fuel-transportation safety advocacy group in Bellingham, Washington tells Bloomberg.

For instance, TransCanada is not planning to use new technologies such as infrared sensors or fiber-optic cables to catch small spills. Instead the company will rely on old-fashioned techniques such as software-based methods and traditional flyovers and surveys.

This means that Keystone XL would literally have to be gushing oil at around 12,000 barrels a day — or 1.5 percent of its 830,000 barrel capacity – – before anyone would realise there was an oil leak.

And you would think that TransCanada would need all the help it can get. It was revealed last month that the existing – southern leg of Keystone – spilled more in its first year than any other first-year pipeline in US history, sprouting leaks 12 times. The company and its contractors are now starting to dig up parts of the Southern KXL to replace what is termed as “anomalies”.

The company’s contractor, Michels, said that it was planning to dig up parts of the pipeline that it had only just buried, due to these anomalies, such as dents and welds.

One land owner, Michael Bishop said “Enough is enough,” after being told that crews were coming back to dig up sections they had just laid. “It is not a matter of if, but a matter of when this line will leak,” he argues. Another landowner David Whitley said: “this pipeline has been in the ground for months and now they’re here again.”

The anomalies in the pipeline reportedly stretch over a 60-mile section of north Texas.

The situation is so bad that Michael Bishop has now set up an organisation called Landowners Against TransCanada, to provide assistance to landowners to fight the TransCanada Keystone XL pipeline in the courts.