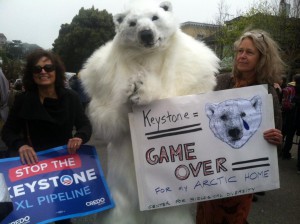 For years now the Canadians have been engaged in a ruthless and relentless international public relations campaign to sell tar sands to the world.

The two bottlenecks that they are trying to unblock are the KXL pipeline in the US, and climate legislation in the EU.

We know the stakes are high, but just how high is becoming clearer.

According to a report released yesterday by RBC Dominion Securities in Canada, saying ‘No’ to KXL could put a massive $9-billion of tar sands investment at risk over the next seven years. However much of this money could just be deferred until viable alternative routes are available.

But if the pipeline is not built at all, it could kill $2.4-billion of tar sands investment altogether.

The bottom line is that KXL is vital to keep the tar sands boom from going bust, especially as Canada faces growing competition for jobs from America’s burgeoning fracking industry and even Canada’s own shale developments. Even a delay in the KXL decision could be highly damaging.

André Goffart, the head of E&P for Total in Canada admitted to the Financial Times yesterday that “The logistics are critical in the development of the oil sands. If Keystone is delayed this year, I believe the industry will not be able to keep up with the current pace of development.”

Others agree. If KXL is rejected by Obama it “might result in delays at those projects that have not been sanctioned yet such as Fort Hills or Joslyn,” argues Skip York, vice-president of Americas downstream consulting at Wood Mackenzie.

Even Joe Oliver, Canada’s Minister for Natural Resources admits that without the necessary infrastructure such as KXL, the tar sands are “stranded.”

Indeed there are already signs that the delay over KXL is hitting tar sands investment already, as it is increasing the uncertainty in what is already a volatile market.

On Friday Canada’s Globe and Mail  reported that at least a half dozen oil companies– including Marathon Oil; Murphy Oil Corp; and Athabasca Oil had sought buyers and partners in the tar sands recently, but all have failed.

The paper adds that “those companies join ConocoPhillips Co., Koch Industries Inc. and Royal Dutch Shell PLC in being disappointed after putting properties up for sale that may have once attracted bids totalling in the billions of dollars.”

Tom Valentine, a partner in the Calgary office of Norton Rose Canada LLP, told the paper that would-be buyers “are now looking at Alberta as a real worrisome investment opportunity, and that’s why I think you’re seeing some of the excitement migrating to the other side of the mountains.”