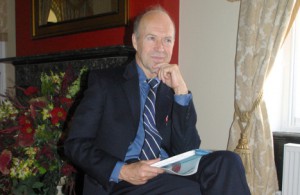 One of the world’s leading climate scientists Dr James Hansen has warned British MPs that exploiting the tar sands and oil shale would make the problem of climate change “unsolvable”.

He was giving evidence as part of his tour of Europe to warn about the dangers of the tar sands and to urge Europe’s politicians not to buckle to Canadian pressure over climate legislation called the Fuel Quality Directive.

The Canadians have been lobbying intensively to undermine the FQD which labels the tar sands as more carbon intensive.

“The potential amount of carbon in these unconventional resources is huge,” Hansen told the British’s Parliament’s Environmental Audit Committee. “If we introduce the tar shale and the tar sands as a source and exploit those resources to a significant extent, then the problem becomes unsolvable.”

Hansen, who recently retired as head of the National Aeronautics and Space Administration’s Goddard Institute for Space Studies, has become a professor at Columbia University in New York.

He also made a link between the Fuel Quality Directive and the Keystone XL pipeline arguing that “either could help achieve a result of leaving the tar sands in the ground. If Europe puts an added price on tar sands oil and/or if the US declines to build this Keystone pipeline, it will make it less easy to expand the oil sands production and more likely that that stuff will be left in the ground.”

Hansen’s trip to Britain will have been an unwelcome distraction to the British government, which is covertly supporting the Canadian position on the tar sands. Leaked documents recently reported in the media revealed that UK has seemingly rejected all the scientific evidence that shows that the tar sands are more polluting than conventional crude or other fuels.

Hansen also argues that the Canadians’ recent lobbying trips to Europe and America were a result of them being so “afraid” that the tar sands might be left in the ground.

Just how afraid is revealed in new figures that show that the Canadian government has doubled its advertising spend on the Alberta tar sands from $9 million last year to $16.5 million this year. And this is just TV advertising.

The Canadians continue to refuse to listen to the science or the scientists. Speaking in New York yesterday, Stephen Harper, the country’s Prime Minister said: “I think all the facts are overwhelmingly on the side of approval” of the Keystone XL adding that the tar sands would add “almost nothing globally” to CO2 emissions.

Comments like that show that Harper has no concept of the science behind climate change at all.  He just believes his own propaganda.