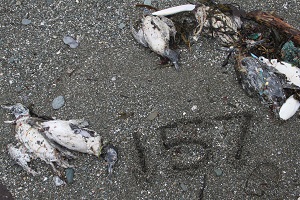 On Monday morning, along the grey sands of a small beautiful beach in Cornwall in south west England, a local resident picked up 157 dead sea birds.

Yesterday morning a further 70 dead birds were collected from the nearby beach at Par.

Locals now believe that thousands of sea birds must have died so far. Guillemots, gannets, fulmars, razorbills and Arctic skuas have all been affected. And every morning, the sea washes up a deadly cargo of more and more dead birds.

Across the Westcountry, from Mevagissey in Cornwall to Lyme Regis in Dorset, “scores of dead and polluted birds are being washed up.” Many more will be dying at sea. “The high spring tides and strong winds are bringing them to shore but it is likely that many more are dying out in the channel,” the Royal Society for the Prevention of Cruelty to Animals (RSPCA) senior scientific officer, Adam Grogan has said.

Since last week, the RSPCA’s rescue centre in Somerset has received hundreds of birds. It has also taken “sackfuls” of dead birds off the region’s beaches.

All of them are covered in a white gluey, oily substance that has stuck their feathers hard together, as if they had been dunked in a pot of glue. The manager at the bird rescue centre Peter Venn says: “If you hold a bird, it almost takes your glove off with it, it’s so sticky. It completely immobilises the birds.”

The substance has been confirmed by scientists at Plymouth University as polyisobutene, known as PIB, an oil additive used to lubricate the engines of ships.

One of the companies to make the product is Chevron. Its product stewardship summary for PIB, states: “the products we produce help fuels and lubricants push the boundaries of speed, strength, cleanliness, and durability.”

But the chemical has a downside. Chevron warns that: “Studies indicate that some PIB-based fuel additives are irritating to the skin or can be skin sensitizers. Some of these chemicals can be significant eye irritants”.

It also concedes that “based on test data, PIB-based fuel additives are not readily biodegradable and may cause long-term adverse effects in the aquatic environment”.

So an oil company admits its product does not break down easily and can cause problems in water. Yet it is completely legal for this chemical to be dumped at sea.

Now a local politician is calling on the government to regulate ships charging pollutants into the sea.  Andrew George, West Cornwall and Scilly MP, is calling for the British Government to take action. He said: “Ships seem to have a licence to pollute … Clearly, they couldn’t care less.”

One local expert on pollution, Professor Steven Rowland from Plymouth University, who is the scientist who identified the chemical, has said it is “just unforgiveable” to be able to discharge PIB legally.

He told the BBC: “A proper investigation is needed to stop this happening again and again, or else our wildlife are likely to go on suffering and dying.”

The signs are not good. There was a previous pollution episode in February where hundreds of birds also died, and the International Maritime Organisation did… absolutely nothing.

And as the weather finally warms up, soon the region’s beaches will be full of people too. Expect kids to soon be coming off the beach covered in sticky, toxic goo…