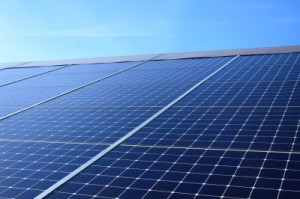 Supporters of fracking often argue that the controversial technology is better for the environment, as gas is cleaner than oil, and both of them are better than coal.

The opposite argument is that fracking is not that clean anyway, it contaminates ground water, and continues to bankroll investment in dirty fossil fuels, instead of clean energy.

And now one of the world’s largest auto-parts companies, which owns a solar division, has blamed fracking for hurting demand for clean energy.

The chairman of Bosch, Franz Fehrenbach, which is based in Stuttgart, told a German newspaper at the weekend. “Photovoltaic is going through a unique transition. But you cannot entirely dismiss that the use of energy-efficient technologies came under pressure through fracking in the United States.”

He also added that the continuation of investment in fossil fuels was undermining solar investment. “The longer availability of fossil fuels naturally has an effect on the (economic) calculation of resource-friendly technologies,” he said.

As if to emphasise the point, Bosch said it was now axing its photovoltaic division and cutting 3,000 jobs. It also said the move was also due to overcapacity coming from China. This is seen as deeply worrying for a company that rarely has to cut its workforce.

The solar versus fracking debate is summed up by the Sunshine state of California which could invest more in solar and renewables or it could frack.

The state already has the largest solar plant under construction in the world in the Mojave Desert and is also home to the pioneering solar company like Sungevity, which has revolutionised the way consumers can access clean technology.

However, a new report says fracking could create anywhere from half a million new jobs in the state by 2015, and up to 2.5 million jobs by 2020.

If you believe the hype, California has what is believed to be the biggest deep-shale reserves in the world, with offshore reserves estimated to hold more than 10 billion barrels of oil and nearly 12 trillion cubic feet of natural gas.

Last Year, Danny Kennedy, Sungevity’s founder summed it up when he said that we can “frack our own backyards and pollute our rivers, or we blow up our mountaintops just miles from our nation’s capital for an hour of electricity, when we could just take what’s falling free from the sky.”