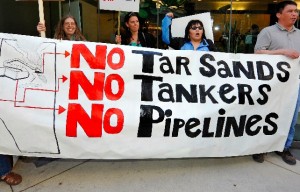 Twenty four years ago, many Alaskans woke up to a changed world.

The Exxon Valdez had ploughed into Bligh Reef and was spewing millions of gallons of oil into the pristine Arctic waters.

In the aftermath of the disaster, fisheries and wildlife were devastated, livelihoods destroyed, lives ruined and communities ripped apart.

Such was the devastation on the communities, that countless people killed themselves, many being ruined financially, whilst hundreds if not thousands got sick and died from working on the clean-up.

If there is one small grain of sand of comfort from the Exxon Valdez is that is serves as a deeply stark reminder that oil and water do not mix, it reminds us that Big Oil can rip up and ruin communities with the blink of the eye. It shows us that the pain and suffering could take generations to heal. If at all.

So it comes as no surprise that yesterday the Coastal First Nations in British Colombia marked the anniversary of the 1989 Exxon Valdez oil spill with an advertising campaign against the Northern Gateway pipeline, the alternative route to take tar sands to the coast.

Enbridge predicts the Gateway pipeline would increase the number of tankers using the BC coast by 220 a year.

Their advert includes the lyrics from Simon and Garfunkel’s famous song: The Sound of Silence, after Paul Simon  agreed to allow them to be used in the anti-pipeline advert. “We thought it was appropriate to release the commercial on the 24th anniversary of the Exxon Valdez oil spill in Alaska,” said Art Sterritt, of the Coastal First Nations.

Sterritt had written a personal letter to Simon asking for permission to use the song and got the goahead for a nominal fee, said to be “about the price of a nice dinner out”.

The two-minute video starts with the infamous recording from the bridge of the Exxon Valdez saying “we’ve fetched up hard aground…” with Simon’s lyrics “Hello darkness my old friend.”

“It’s an honour to use Paul Simon’s famous song, The Sound of Silence, to help remind British Columbians of the danger of oil tankers,” said Sterritt. “An oil spill is the sound of silence. It silences communities, it silences cultures and it silences wildlife. That’s what we’ll have in BC if Enbridge’s Northern Gateway Pipeline project is approved: A silent coast.”

The advert points out that a staggering 80% of British Columbians support banning oil tankers in coastal waters. It ends with a simple message: “Don’t be silent. Vote for an oil-free coast.”

The two-minute commercial is airing on television stations in Northern BC, as well as on YouTube. Watch it here.