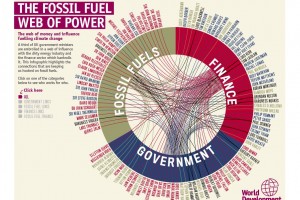 On both sides of the Atlantic, politicians are intricately linked to the oil industry.

Last Thursday, OCI revealed that the 5 cosponsors of the latest pro-Keystone XL bill have received, on average, over $662,000 in fossil fuel-related campaign contributions in their careers.

But it is not just in America where Dirty Energy Money clouds the political system. Great new research by the World Development Movement has revealed that one third of Ministers in the UK government are linked to the finance and energy companies driving climate change.

This “energy-finance” complex as WDM calls it is “at the heart of government is allowing fossil fuel companies to push the planet to the brink of climate catastrophe, risking millions of lives, especially in the world’s poorest countries.”

The three most important Government’s Ministers including Prime Minister David Cameron, Foreign Secretary William Hague and Chancellor George Osborne are all embroiled in the nexus of money and power fuelling climate change.

WDM argues that “If we are to move away from a high carbon economy, the government must break this nexus and regulate the finance sector’s investment in fossil fuel energy.”

And its not just the House of Commons, either. The House of Lords is also home to dozens of people linked to either big Finance or big Energy. An investigation has recently revealed that a sixth of Lords have remunerated links to the financial sector.

Let us not forget that Big Finance and big Energy are intricately linked in a complex web of personal and funding. Between 2010 and 2012, the UK’s five biggest banks underwrote £95.5 billion in corporate bonds for fossil fuel companies and another £74.5 billion in new share issues.

All five British banks have people on their boards who are linked to the fossil fuel industry.

Beyond Hague, Cameron and Osborne, other members of the British Cabinet are also deeply linked to the oil industry: Let’s look for a moment at Vince Cable, The Liberal Democrat who is the Business Secretary who is also the “Minister for Shell”. And where did Vince once work? Shell.  As WDM point out Vince’s “past at Shell, where he worked for seven years between 1990 and 1997, is well known.”

I once phoned Vince up to ask him about persistent rumours that he had been part of a team from Shell who had “negotiated” with the Nigerian Government over the imprisonment and potential release of Ken Saro-Wiwa in the weeks before the writer’s death in November 1995.

Vince flatly denied the accusations and even phoned me back after having spoken to his diary Secretary: No he hadn’t been in Nigeria in the weeks before Saro-Wiwa’s death, he said. There was no substance to the rumours, at all, he maintained. In the years since we spoke, nothing has come to light to challenge Vince’s version of events.

But years later the fact that Shell’s ex-senior economist is now in government as a Minister, including being the “Minister for Shell” has somehow escaped the scrutiny and outrage that it should have done.  In part this is because the intricate web of politics and oil and finance has become so normalised that it nearly goes with comment or criticism.

That is why WDM’s report and wonderful Infographics are brilliant and another useful tool in the growing tide of evidence about the desperate need to separate oil and state, and about getting Dirty Energy Money out of politics.

Because until we do, the climate crisis is just going to get worse.