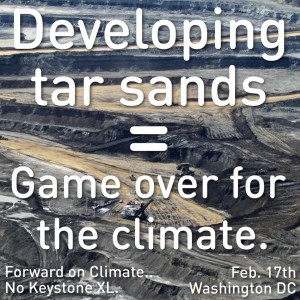 A week on Sunday – on the 17 February – there will be what is being touted as the largest climate rally in America’s history.

Tens of thousands of Americans are expected to gather on the National Mall in Washington for the “Forward On Climate” Rally, urging President Obama to take decisive strong action on climate change.

And top of the list of action is saying NO to the KXL.  And yesterday, the growing anti-KXL campaign received a boost from what some may see as an unexpected quarter.

Citing serious adverse health concerns about the pipeline, National Nurses United (NNU) announced it was joining  with environmentalists and other trade unions in opposing the KXL. With some 185,000 members, NNU is the largest union of registered nurses.

In case you are wondering why nurses are getting involved in climate and environmental action, the NNU believes that KXL could have a significant impact on the health of communities in the tar sands production areas, along its route, as well as those communities near refineries.

In addition, the NNU is arguing that emissions from tar sands will exacerbate climate change which therefore then affects public health more broadly, including spreading infectious disease, waterborne and food borne pathogens.

“Nurses care for patients every day who struggle with health crises aggravated by environmental pollution in its many forms,” said NNU Co-President Deborah Burger. “As a society we need to reduce the effects of environmental factors, including climate change, that are making people sick, and endangering the future for our children. That’s why we oppose the Keystone XL pipeline.”

Burger added: “Our leaders should be focused on finding safe, sustainable energy that would also help stem the increase in environmental pollution and climate change. The health of our world depends on it.”

But even if KXL’s opponents manage to stop the KXL, will they stop the development of the tar sands? There is still the Northern Gateway route which could take the dirty fuel west from the pipeline. And now it seems there could even be another pipeline running North from Alberta to the Arctic.

Although this may seem completely stupid to some, according to Northwest Territories leader Bob McLeod, the northern route could be a possibility.  “If somebody comes forward with a proposal to go north, we would assess it like any other project,” McLeod said in a recent interview. “The reality is, it’s doable,” he added. “With climate change, the Arctic ice pack has melted significantly.”

Climate change potentially opening up a new route for the dirty tar sands… The word ironic does not do it justice.