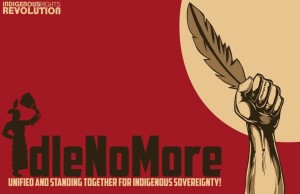 There is no protest movement in history that has not suffered a backlash: whether it be civil rights, women’s rights, gay rights, human rights or the environmental movement.

More recently in the UK, there have deeply disturbing revelations as to how the police infiltrated the environmental protest direct action movement. In doing so, there was no limit to how deceitful and disgusting they would go. Spies slept with activists, and had children with them, even though the undercover Cops were already married with kids elsewhere.

When you thought it could not get any worse, it did. Yesterday it was revealed they were using the identities of dead children as their aliases. If you want to read more on how companies and the police spy on activists, get this great book by Eveline Lubbers.

Across the Atlantic, in Canada, meanwhile a new vibrant protest movement has sprung up: Idle No More, which is a civil rights movement fighting the Canadian government’s woeful neglect of its indigenous community.

Over the last few months it has grown into a national – and even international protest movement, with protests across Canada and Chief Spence’s  hunger strike, generating widespread political and  media attention. Much of the political action has been around trying to stop the Canadian government’s Bill C-45 which undermine environmental protection laws and indigenous sovereignty.

The Bill, which was passed last December, changes land use and resource policies and undermines environmental laws, dramatically undermines the ability of Indigenous communities in Canada to protect their land.

Since December there have been rallies and protests across Canada and solidarity actions across the globe. But with the successes comes the backlash.  Hopefully we are not seeing the start of a coherent campaign of intimidation, but the Canadian press is reporting that an Idle No More organiser, Lesley Belleau, says she has contacted police after receiving a package containing death threats.

Belleau, who lives in Peterborough, Ontario said the death threat letter was sent to her sister. It read: “You are a dead piece of sh-t. A good Indian is a Dead Indian. Stay away from the SOO Lesley Belleau.”

The envelope contained newspaper cuttings of Belleau’s involvement in Idle No More protests along with a defaced picture of Assembly of First Nations National Chief Shawn Atleo.

Despite the threats, the Idle No More movement has always espoused non-violence. Ryan Bellerose an organizer for Calgary’s Idle No More group, argues “The entire point of Idle No More has always been to be non-adversarial, non-confrontational and peaceful.”

Indeed on Valentine’s Day, Idle No More is co-organising events in solidarity with two important initiatives, including One Billion Rising (an international campaign to stop violence against women and girls) and Have a Heart Day (an initiative to support Indigenous children).

Candle light vigils, teach-ins, rallies, round dances, and other creative acts of awareness, resistance and solidarity are all being encouraged. For more details here.