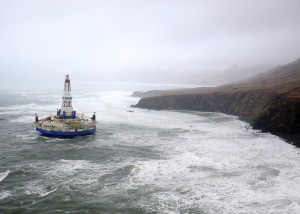 You would have thought that the British government would have been watching aghast at Shell’s comedy of errors in the Arctic and wondered how one of Britain’s biggest companies could have got it so badly wrong.

Shell has become a laughing stock in the international press, with Rolling Stone summing it up nicely by saying the company’s Arctic adventure so far had been an “epic failure”.

Shell’s continuing technical and operations problems serve as an acute warning to what happens when one of the world’s largest oil companies – with all the expertise behind it – operates in such a hostile and fragile environment as the Arctic.

So instead of heeding that warning the UK government is now refusing to support a moratorium on Arctic drilling.

Although Britain is not a member of the Arctic Council, it is one of six observer countries that have an interest in activities in the Arctic. It therefore can make recommendations to the eight governing Arctic states.

But it won’t put forward a total ban. The Government is trying to argue that existing efforts to protect the fragile Arctic environment, including supposedly high environmental and drilling standards, will be more effective than any ban.

“We believe these measures–combined with effective and ambitious global action to reduce global greenhouse gas emissions–are more likely to be effective in protecting the Arctic environment than pressing for a complete moratorium on all drilling in the Arctic region,” the government said.

This stance has been criticised by MPs, especially those on the influential Environmental Audit Committee, who are arguing that the UK has a moral imperative to take a lead on the issue and make a stand.

The chair of the committee, Joan Walley told the BBC: “The grounding of the Kulluk raises serious questions about the safety of Shell’s operations in the Arctic”, and therefore “we think that the (British) government can take a moral lead by speaking out strongly on this issue and calling for much more sweeping action than we’re seeing at the moment. The safeguards are simply not in place for the Arctic.”

Indeed, Shell is now going to have to answer questions about its fiasco from the MPs on the committee. Walley said: “The grounding of the Kulluk rig raises serious questions about the safety of Shell’s operations in the Arctic and we will be calling them back to give further evidence.”

Shell meanwhile continues to live in a parallel universe. Its spokesman told the Guardian: “Our record throughout 50 years’ experience of operating in Arctic and sub-Arctic regions demonstrates that we have the technical expertise to explore for and produce oil and gas in challenging locations.”

The problem for the company is that its recent record speaks otherwise. People don’t believe Shell anymore, or their friends in government when they say that they can safely drill in the Arctic.