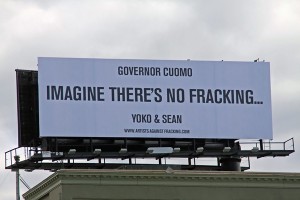 John Lennon would have approved of this.

Yesterday his widow, Yoko Ono and son Sean placed a full-page advert in the New York Times, calling on the Governor of New York, Andrew Cuomo to “Imagine There’s No Fracking… and give clean energy a chance.”

The ad describes how the fracking process is poisoning drinking water with gases and toxic chemicals.

“No amount of regulation can ever make fracking safe,” it read. “No one can be sent thousands of feet under the earth to make repairs once the cement fails – and it will. The enormous pressure and temperature changes at those depths guarantee it.”

The ad continues “Fracked gas is not climate friendly. Methane is a powerful greenhouse gas that leaks from the failed wells, fractured rock and pipelines…. New York can become the Clean Energy Empire State. With an economy bolstered by insulating all buildings. This way we could save far more energy and create FAR more jobs than fracking, plus save consumers money forever. And let’s scale up solar and wind power with a smart grid for truly clean, economical energy.”

Yoko and Sean are not alone. Over 200 other artists, and celebrities such as  Leonardo DiCaprio, Mark Ruffalo, Julianne Moore and Lady Gaga, have joined forces in their new campaign group called, Artists Against Fracking, which yesterday announced the #DontFrackNY video contest.

They are looking for budding artists to produce anti-fracking videos by January 20. The winner will be invited to have lunch with the two celebrity judges.

The anti-fracking campaign has to be welcomed, although our ever eagled-eyed colleagues over at the oil watchdog Platform have spotted a small flaw in Yoko’s opposition to fracking.

And of course Shell is in to fracking big time. Smith continues that he hopes Yoko “might be able to connect the dots between Meltdown and the horrors of fracking, and that you might be able to creatively disrupt the cosiness of the Shell/Southbank Centre relationship in some way through your engagement with the festival.”

Meanwhile there needs to be an Artists Against Fracking campaign in the UK. The latest politician to go frack-mad is London Mayor Boris Johnson.

Writing in the paper leading the pro-fracking charge in the UK, the right-wing Daily Telegraph, Johnson argues that “If it were not so serious there would be something ludicrous about the reaction of the green lobby to the discovery of big shale gas reserves in this country. “

In an article devoid of any intellectual rigour, lack of analysis and factually wrong in too many places to mention, he argues that fracking is “an answer to the nation’s prayers”, which offers the “hope of cheap electricity.”

Ironically, in a great article the day before in the Observer, the paper’s political columnist Andrew Rawnsley had dismissed what he called these “frack-heads”. “For believers, and there are now many of them in the Tory party, shale gas is going to provide Britain with a remarkable bonanza of cheap energy”, he wrote.

However, the “truth is that no one has a clue whether it can be exploited at all, no one will be sure for quite some time to come and, even if it can be profitably tapped, there are very hot arguments about whether it can be done safely.”

What is interesting, as I have said before, is how the climate sceptics haven jumped on the fracking bandwagon too.  And there are indeed many of them inside the Tory party too.

Can you imagine where the energy debate would be now without them?