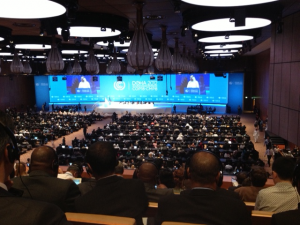 It is always difficult writing something positive about the UN climate change talks.

We have been here so often before. The desperate need for action, the sense of urgency at the start and yet the bone-crunching sense of disappointment at the end. I have written before how the talks feel like Groundhog Day.

So will the latest round of climate talks at Doha be any different? Over 17,000 participants from some 194 countries have descended on the oil-rich nation. Without any sense of irony, the former Qatari energy minister H E Abdullah bin Hamad Al-Attiyah, has been elected President of the Conference of the Parties.

He has said the meeting was a “golden opportunity” to make progress on a new global climate deal. “This is an historic conference,” Al-Attiyah said in his opening address, “it is of vital importance considering the items on its agenda. It is a turning point in the negotiations on climate change.”

But many believe any deal worth the paper it is written on is a long, long way off, even though time is literally running out, with the first phase of the Kyoto Protocol finishing at the end of the year.

As each UN conference ends in delay and useless deals, the world continues to warm. As seasoned environment correspondent, John Vidal points out in the Guardian, “last month was the 333rd consecutive month that global temperatures were above the 20th century average, and 2012 will almost certainly be the hottest ever recorded in the US.”

The extreme weather of “hurricanes, heatwaves, wildfires and droughts blistered farmlands and ruined crops from Kansas to Assam, and Britain has had its wettest summer and driest spring to date” he adds. “Nigeria, China and much of India and Australia have all had their worst floods in decades. In September the Arctic sea ice cover shrank 50% below the 1979-2000 average.” Right this moment, Britain is mopping up after disastrous floods. America is still cleaning up after Hurricane Sandy.

Despite the fact that “evidence of global warming mounts both on the ground and in science” writes Vidal, “in the bubble world of international climate diplomacy, little happens.”

The gulf between rich and poor remains a chasm, with many poorer countries wanting deeper cuts in carbon emissions from the richer nations.

Vidal, for his part knows where to point the blame “for this miserable state of diplomatic affairs” which “must be laid squarely on the US in particular and the rich countries in general. For three years now, they have bullied the poor into accepting a new agreement. They have delayed making commitments, withheld money and played a cynical game of power politics to avoid their legal obligations. The resulting distrust has fatally plagued the talks.”

A statement from a group of over 100 of the poorest and most at risk nations has demanded action. “The Kyoto Protocol is more than a treaty, it is the foundation upon which our multilateral effort to address climate change rests,” it said. “The countries most responsible for the crisis must agree to a second commitment period under the Kyoto Protocol that will deliver genuine benefits to the climate that sustains us all. Currently, what is on the table falls far short of this climate imperative.”

Cindy Baxter, another seasoned UN climate-watcher, who is in Doha argues that she is not expecting much from the conference, not least due to Al-Attiyah’s “extensive links with the fossil fuel industry.”

So it is, once again, looking very much like a wasted opportunity rather than a golden one, but I hope for once I will be proved wrong.