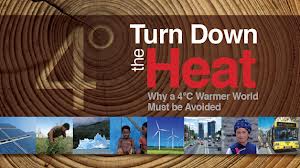 Then you better start swimmin’
Or you’ll sink like a stone
For the times they are a-changin’. – Bob Dylan

After decades of campaign efforts to get the World Bank to stop investing in fossil fuels, it appears that the institution that was for many years the largest source of multilateral public support for the fossil fuel industry is finally turning a corner.  Despite ongoing controversies about pending fossil fuel projects, notably the coal plant in Kosovo, the Bank is now beginning to talk like an institution that has realized that climate change adaptation and mitigation will be the dominant challenges of this century.  What the Bank decides on Kosovo will indicate whether this report is a sea change, or more hot air.

Turn Down the Heat, is a snapshot of the latest climate science prepared for the World Bank by the Potsdam Institute for Climate Impact Research (PIK) and Climate Analytics.  The report says that the world is on a path to a 4 degree Celsius (4 degrees Celsius = 7.2 degrees Fahrenheit ) by the end of this century and that current greenhouse gas emissions pledges will not reduce this by much. A 4 degree warming would trigger a cascade of cataclysmic changes that include extreme heat-waves, declining global food stocks and a sea-level rise affecting hundreds of millions of people.

“A 4 degree warmer world can, and must be, avoided – we need to hold warming below 2 degrees,” said World Bank Group President Jim Yong Kim.  “Lack of action on climate change threatens to make the world our children inherit a completely different world than we are living in today. Climate change is one of the single biggest challenges facing development, and we need to assume the moral responsibility to take action on behalf of future generations, especially the poorest.”

Oil Change International has long campaigned for an end for support for fossil fuels at the World Bank.  In 2001, under pressure from campaigners, the World Bank agreed to undertake the Extractive Industries Review, which sought to judge the poverty alleviation impacts of World Bank support for the extractive industries. Following a two year process, Dr. Emil Salim, the head of the Extractive Industries Review, surprised the industry, the World Bank, and NGOs alike by recommending that the Bank phase out its support for coal immediately, and for oil within five years.  One of his key reasons for reaching this recommendation was his concern for climate change – which at the time Bank staff said was beyond his purview.

The World Bank’s Board formally rejected Dr. Salim’s recommendation nine months later – much as they rejected a new Energy Strategy almost a decade later. One of the primary reasons that the World Bank gave for continuing to fund fossil fuels in both cases was poverty alleviation. Yet, a study by Oil Change International in 2010 found that none of the World Bank Group’s $7.2 billion in fossil fuel finance over the previous two years directly targeted the poor or ensured that energy benefits are reaching the poor.

The new Bank report out today notes that while all regions of the world would suffer in a 4 degree world – some more than others – but the report finds that the poor will suffer the most.

It is worth noting that although the Bank study points to a 4 degree warming by 2100, this is not inconsistent with other recent warnings that the world is on track for a 6 degree warming.  “With current policies in place, global temperatures are set to increase 6 degrees Celsius, which has catastrophic implications,” IEA Chief Economist Fatih Birol said earlier this year. “If as of 2017 there is not a start of a major wave of new and clean investments, the door to 2 degrees will be closed.” 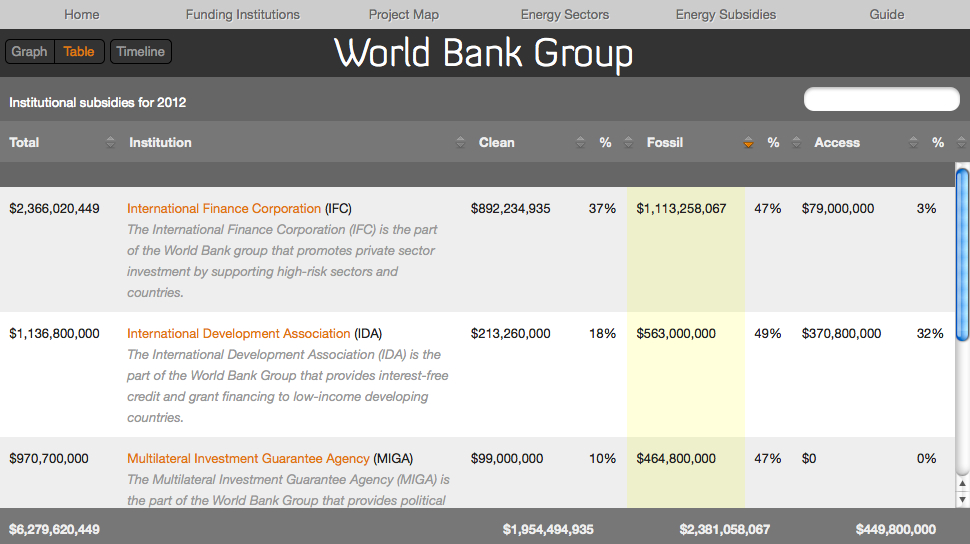 One of the scientists responsible for climate modeling underlying both the World Bank report and the IEA warning confirmed over email last night that we are on course for 6 degrees of warming ultimately, reaching 4 degrees by 2100.

Meanwhile, the oil industry continues it’s global push for enough production to push the world beyond 6 degrees as fast as possible.

To examine the World Bank’s energy finance in detail, please visit our Shift the Subsidies database.

According to Oil Change International, last year the World Bank financed $2.38 billion worth of fossil fuel projects, and $1.95 billion in clean energy.  We place an additional $1.94 billion of energy finance in an “other” category.  You can read about our methodology here.

Climate change is happening now.  It is largely caused by the burning of fossil fuels. Numerous studies have identified the poor as the most vulnerable to climate change. In this sense, the Bank’s financing of fossil fuels is putting its own clients at greater risk. Virtually all governments and now the World Bank President have stated that global average surface temperatures must stay below a 2 degree C increase above pre-industrial levels if we are going to avoid the worst impacts of climate change. In order for this to be achieved, global emissions must start a downward trend within the next 5 years.

The time for debate is over.  World Bank out of fossil fuels.  Now.