What if you knew that smoking that one last packet of cigarettes was going to give you cancer?  Imagine if our understanding of cancer was so precise as to allow doctors to predict with virtual certainty that smoking that particular pack, which you just picked up at the corner store, would definitely be the last straw and cause you to contract life-threatening cancer?  Obviously, you would not smoke that pack.

In the world today, global warming is our collective cancer, and despite dire and clear warnings, the oil industry is still smoking away. The best climate science in the world tells us that in order to avoid the worst impacts of climate change, we need to limit global warming to no more than 2 degrees Celsius.  But the amount of new oil production the industry is bringing online over the next eight years is exponentially more than we can afford to burn and stay under two degrees.  We simply cannot afford to burn all the oil that the industry is capable of producing over the next few years, and in the long term. 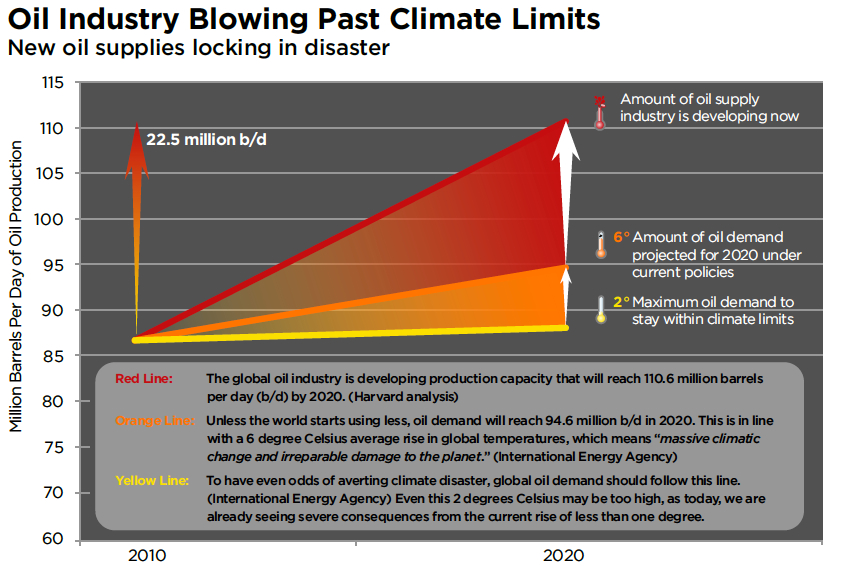 It is worth noting that this is a new equation that reaches essentially the same conclusion as the Carbon Tracker / Bill McKibben Math, but by using the actual plans of the industry itself rather than estimates of fuels in the ground.  Carbon Tracker measured the total amount of carbon in fossil fuels in existing reserves (2,795 gigatons) and found them to be five times more than can be safely burned (565 gigatons).  That is terrifying, although this does not tell us along what timeline those reserves will be pulled out of the ground.

In this case, we are looking at what the oil industry is building or is expected to build in the next eight years (110.6 million barrels per day of oil production capacity), and comparing it to what experts agree that our oil usage needs to be in just the next eight years if we are to avoid climate disaster (88.1 million barrels per day).  In short, what this new analysis tells us is that the oil industry is in fact developing more than enough oil over the next 8 years to lock in climate chaos.

In June 2012, a paper from the Harvard Kennedy School’s Belfer Center for Science and International Affairs shook the energy policy world.  The paper was titled Oil: The Next Revolution.

In the paper, Leonardi Maugeri, a former executive at Italian oil giant ENI and fellow of the Belfer Center’s Geopolitics of Energy Project, detailed the astounding level of investment and activity going on in the global oil industry today.

Maugeri conducted a unique field-by-field analysis of the major oil projects proposed and under construction in most of the world’s oil producing zones. He concluded that just less than 50 million barrels per day (b/d) of oil production capacity is potentially under development through to 2020.  He adjusted this down to 28.6 million b/d after factoring risks that would prevent some of these projects materializing.

When factoring in the decline in production from currently producing fields he concluded that by 2020 global oil production capacity could reach 110.6 million b/d (See Figure 1).

The United States and Canada are at the forefront of this oil boom. Triggered by high global oil prices, the development of technology to access unconventional oil resources in these countries is a significant factor in the global oil boom. Canada’s tar sands and America’s tight oil, obtained through hydraulic fracturing (fracking) and horizontal drilling, are the new heavyweights in North American oil production.

Table 1: Maugeri forecast for global oil and NGL production capacity in 2020 in million barrels per day

Finally, it should be noted that Maugeri’s analysis of the industry’s growth is by no means the most aggressive.  Citigroup, for one, has a much more bullish scenario for the North American oil industry that has been widely cited, including by both U.S. Presidential campaigns.

The International Energy Agency produces annual energy demand forecasts using several scenarios.  These scenarios include one that charts where current policies take us and another mapping where policies that would have a strong chance at constraining climate change to within 2 degrees would place energy demand.

If we use the 2011 IEA scenarios as a benchmark, the difference between the oil production capacity that the industry is currently planning for 2020 and where oil demand must be to constrain climate change is a staggering 22.5 million barrels per day.

Therefore, 79% of the oil production capacity being planned today for 2020 is over and above the safe level of global oil demand in that year.

Perhaps even more worrying is the fact that the IEA Current Policies Scenario is in line with a rise in global temperatures of 6oC. This is commonly considered to herald an unlivable planet. Even under this disastrous scenario the industry’s current objectives represent an excess of 16 million b/d.

Spurred on by rising oil prices since 2003, the global oil industry, with the U.S. and Canada at the forefront, has invested billions of dollars in developing technology to access billions of barrels of previously inaccessible oil. This may have postponed the so-called “peak oil” crisis but it has precipitated a far worse crisis that will be irreversible.

The IEA 2 degree Scenario (also known as the 450 Scenario, which recent science suggests is conservative), states that global oil demand should peak by 2018 and steadily decline thereafter. We are currently not on that trajectory, but investing in and developing capacity to surpass it by over 25% can only guarantee that we will not make it. Instead, the world needs to aggressively invest in oil demand reduction rather than a continued unsustainable binge.

We need to constrain global oil production to within climate limits now, before the oil industry locks us into inevitable climate disaster.

-This post was authored by Lorne Stockman, Steve Kretzmann, and David Turnbull.