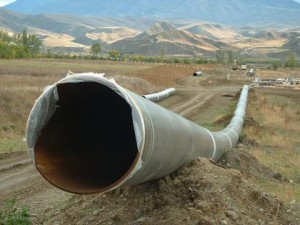 BP has problems in Azerbaijan. The country’s top energy official has urged greater “scrutiny” of the international consortium led by BP which is developing Azerbaijan’s main oil field.

The country’s Industry and Energy Minister Natiq Aliyev said that drop-off in production over recent years at the Azeri-Chirag-Guneshli project, known as the ACG, was “abnormal”.

Last week, Azerbaijan’s president Ilham Aliyev said that errors by AIOC, the consortium led by BP developing the field, had cost the oil-dependent country a whopping $8 billion in lost revenue.

But the development does not just have a financial cost. For the last few years, James Marriott and Mika Minio-Paluello, two activists from the oil watchdog Platform, have been researching the human and ecological cost of the BTC pipeline which carries BP’s oil from Baku in Azerbaijan to Ceyhan in Turkey.

They have just written a stunningly powerful book called the The Oil Road, published by Verso, which brings to life the story of the BTC pipeline.

The pipeline starts its journey just south of the city of Baku, a fast growing city on the edge of the Caspian where the influence of the petro-dollar is everywhere: from the fashion stores of “Oil Workers Avenue” to the cruising Mercedes and Porches with their tinted windows, or the infamous but innocuous concrete Billion Dollar Bridge. It is named as such because that is how much it cost due to the petro-corruption that engulfs Baku like a bad-smelling smog.

The books draws strength from the inspiration that James and Mika take from the people they meet: Arzu, the human rights campaigner, whose activism has led her to be on a list of people who might be killed by the authorities. “We ask them not to sell our democracy for oil. But do you think they’re listening?” she asks.

Mayis, who accompanies them through Azerbaijan, is a Green Party campaigner, who wants to wean the oil-addicted Baku off oil. “People aren’t quite ready for it yet, but we are getting there”, he says optimistically.  Both BP and the government have repeatably tried to to stop Mayis from speaking out against the pipeline.

Central to the story of the pipeline is the oil giant, BP, and its ex-Chief executive John Browne and the Contract of the century, which BP said was to develop the country as well as the oil. Signed in 2005, it was the pinnacle of Browne’s career.

They also meet the “invisible fathers” of the road like Sabit Bagirov, the  ex-head of the State oil company, who remembers Margaret Thatcher being flown in to seal BP’s first contract in the country. The Iron lady was a “formidable foreign policy weapon” noted one British official.

BP promised a pipeline that would be a new era of social and environmental responsibility. But it is anything but.

They follow the pipeline route out of Baku, past the BP visitor’s Centre west across open desert and into the Causcasus. Along the route they hear stories of the pipeline disrupting lives and livelihoods, with compensation sometime paid to the wrong people. They encounter officials from the Ministry for National Security who tells them that BP does not like people snooping around the pipeline route.

In Tbilisi, Georgia, they meet Manana from Green Alternatives who has visited all the communities to help them file complaints against the pipeline, which has become a “semi-forbidden  zone” and a “corridor of violence”. Manana too has been intimidated by the authorities.

They learn that BP’s promises to undertake work to meet their “conditions of permit” were never undertaken. In the Georgian mountains they meet the villagers whose houses had been damaged by the construction work but who were never compensated, but whose protests were also met by intimidation. They tell the story of how BP tried to cover up faulty coatings for the field joints in the pipeline. In Turkey too, anti-pipeline activists tell stories of beatings and torture.

The Oil Road is a rich, rewarding read.  It is a written in a poetic, fluid style that seamlessly weaves an engaging personal story into the current geo-politics of oil aggression and the recent volatile recent history of the region.

In fact, The Oil Road is a must-read for anyone who cares about oil and the stranglehold it has on our society.

This is an expanded review of the The Oil Road, first published by Red Pepper magazine.