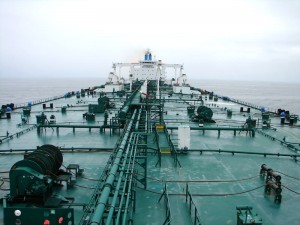 The Financial Times has just revealed that the oil trading arms of BP, Shell and Vitol have applied for licenses to export U.S. crude to Canada.

U.S. crude exports are restricted for energy security reasons and granting new licenses would mark a reversal of decades of this policy.

The specific crude that is currently looking for an outlet is coming from the booming Eagle Ford in Texas. It’s a light sweet crude obtained from the geologically tight formations through horizontal drilling and fracking.

That this crude is desperately seeking a market outside of the United States signals an irony that will not be lost on tar sands campaigners, or the communities living close to the super-polluting heavy oil refineries on the Texas Gulf Coast.

These refineries have in recent years invested billions of dollars – albeit with the help of generous tax breaks – in special equipment to refine Canada’s dirty tar sands oil and other very heavy oils from Latin America and elsewhere. As a result, appetite for the Eagle Ford’s light sweet oil on the Gulf Coast, the world’s largest refining complex and a relative stone’s throw from the Eagle Ford fields, is limited.

Thus it would appear that Texas, and the US more generally, is exchanging light sweet oil, that is easy to refine and yields a high proportion of gasoline per barrel, for Canada’s heavy sour tar sands oil that yields more diesel and byproducts such as petroleum coke.

Given where we are with action on climate change, and the fact that the fossil fuel industry already has five times the reserves that the planet’s atmosphere is able to cope with, the U.S. becoming an oil exporter is a big deal.

In the last decade, the North American oil and gas industry has pried open billions of tons of oil and gas through new technologies, from tar sands extraction and ultra-deepwater drilling to fracking. It has in its sights billions more in the form of the kerogen in the shales of the Rocky Mountains and newly accessible resources in the Arctic and elsewhere. The industry’s hunger for profit is insatiable and high oil prices mean that it may be able to keep gorging for decades.

But as the U.S. moves to increase exports of coal, natural gas, petroleum products and now crude oil, what will become of the already marginalized debate on climate change?

The industry has invested hundreds of millions of dollars in undermining climate science and the perception of climate science by the American public. It defeated climate legislation in 2010 and continues to fund and encourage a climate skeptical Congress that attacks any attempt to regulate greenhouse gases.

For the fossil fuel industry, the profits at stake have increased with every new discovery of oil and gas in North America and every new development. By opening up new markets for American oil, the stakes are being raised another notch.

So while the industry cashes in and finds even more incentive to maintain business as usual and ignore the looming climate crisis, as if it really needed one, the fight for climate justice just got that little bit harder.