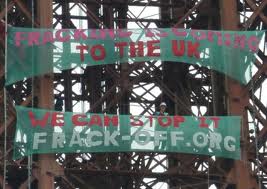 Slowly but surely the last remnants of any green veneer of the British conservative government is peeled away as it lurches to the right.

For a while we have known that behind the scenes the rank and file of the Tory political right have been attacking renewable energy and promoting fracking.

It is notable that over the last few months, the Tory grandee and arch climate sceptic, Lord Lawson, who spouts so much nonsense on climate change, has also become a cheer-leader for fracking.

Maybe one ex-Tory Chancellor has the ear of another, for yesterday, George Osborne, the present incumbent, told the Conservative conference that the Treasury is consulting on a “generous new tax regime” for the fracking industry.

As one paper puts it, the move “sets the government on a collision course with environmental campaigners.”

The collision course will be set later this year, when the Coalition government is expected to give the green light to fracking.

The reaction from some parts of industry to Osborne’s announcement was predictable, with one business lobby group, the Institute of Directors, saying it was a great chance to exploit “a really valuable asset, right on our own doorstep”.

Other industry groups were less impressed though. Osborne is ignoring the voice of influential business groups and banks such as CBI and Deutsche Bank who have warned that the UK is very different to the US, where there are huge differences in mineral rights, population density and environmental regulations, to name a few.

He also faces a fight from the renewables lobby. Peter Young, chairman of the Aldersgate Group which is comprised of over 50 green companies and investors, warned giving generous backing for shale gas would undermine renewables investment: “Subsidies to the mainstream gas industry would be better spent on low carbon energy sources,” he said.

He is also ignoring even his own back-benchers. Laura Sandys, Conservative MP and part of the ministerial team at the Department of Energy and Climate Change, said there would be huge public opposition to shale gas: “Onshore wind is a walk in the park, by comparison,” she says.

Not surprisingly the environmental groups are not happy, either. “Generous shale gas tax breaks show the chancellor clearly isn’t listening to the increasingly vociferous warnings from leading politicians, businesses and climate experts about his reckless dash for gas,” said Craig Bennett, Friends of the Earth policy and campaigns director.

One thing is certain: there will be trouble ahead..