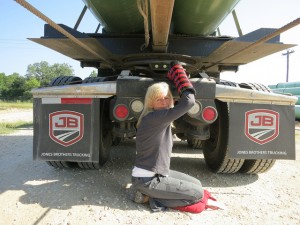 As I write three anti-tar sands protestors remain in jail in Texas for stopping the construction of the Keystone XL pipeline. They are being held on $1,000 each. Four other protestors have been released.

The seven had spent the day locked onto trucks carrying the KXL pipeline. They closed the pipe yard for five hours.

These are not all seasoned activists. Those arrested include a cameraman, a methodist minister, a farmer, a local small businessman and a Texas grannie called Tammie Carson.

“I’m doing this for my grandchildren” says Tammie, who is pictured above. “I’m outraged that multinational corporations like TransCanada are wrecking our climate. The planet isn’t theirs to destroy, and I’m willing to take a risk to protect my grandchildren’s future.”

Denny Hook, a retired Methodist minister from Gainesville Texas, adds. “Things are so dire that if all of us don’t rise up we won’t make it. This pipeline is the difference between Earth on the edge and Earth over the edge.”

Chris Voss, another participant in the action, is concerned for the health and safety of his entire rural community. “Tar sands pipelines have a terrifying history of leaks,” Chris laments. “Keystone XL threatens our water, which is part of the commons. I can’t just stand aside while our collective commons are being taken, controlled, and polluted.”

The protestors are part of the Tar Sands Blockade, which is a coalition of Texas and Oklahoma landowners and climate organisers using peaceful protest to stop the construction of Keystone XL.

“The blockade is an expression of people who have spent years using every available avenue afforded to them, and nothing has worked,” explains Tar Sands Blockade spokesperson Ron Seifert. “The urgency of this crisis is galvanizing supporters who understand that doing nothing involves a greater risk than taking action.”

Late last night, Tammie’s son Erik, posted on his Facebook page: “#LoneStarTammie has been before the judge and bail has been set but the Sheriffs Dept. has refused to book her in a timely manner and now despite there being someone there to pay for her release, we are being told it may be hours before they will return her to us… FREE TAMMIE CARSON!! — at Polk County Jail.”

Just after mind-night Texan time, Tammie Carson was released, but three others remain in jail.

He adds: “Doing nothing is a greater risk than taking action.”

If you want to donate to the campaign go here.