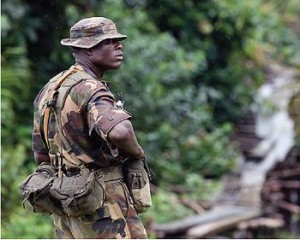 Yet more evidence that Shell is still at heart of the vortex of violence that continues in the Niger Delta.

Platform, the oil industry watchdog which is based in London, has released a great briefing paper, called Dirty Work, which examines Shell’s security spending in Nigeria.

The story is covered in today’s Guardian newspaper. The Shell documents – released to Platform by a company whistleblower – reveal that the oil company spent $383m over three years protecting staff and installations in Niger delta region.

This represents about 40 per cent of the $1 billion Shell spends globally on security.

Shell’s vast operations in the Niger Delta are guarded by over 1,300 government forces, including 600 police and Mobile Police,  known locally as the ‘kill and go’ and 700 soldiers from the Joint Task Force (JTF), a combination of the army,  navy and police.

It is these government forces that have a history of violent repression against protestors against Shell, with many thousands of Nigerian being killed over the last couple of decades, and countless others have been tortured, raped and beaten or had their homes destroyed.

Let us not forget that Shell has also supplied these government forces with gunboats, helicopters, vehicles, food, accommodation, satellite phones, stipends and large-scale funding throughout years of conflict in the Delta region.

In 2009, Shell spent $65m was these government forces and $75m on “other” security costs, believed to be a mixture of private security firms and payments to individuals.

“The scale of Shell’s global security expenditure is colossal,” argues Ben Amunwa of Platform, who wrote the briefing. “It is staggering that Shell transferred $65m of company funds and resources into the hands of soldiers and police known for routine human rights abuses.”

Others were shocked too: “This proves what we in the Niger delta have known for years – that the air force, the army, the police, they are paid for with Shell money and they are all at the disposal of the company for it to use it any how it likes,” said Celestine Nkabari at the Niger delta campaign group Social Action.

“These figures are alarming – it is a scandal that so much money is spent on security instead of on the local communities whose livelihoods are destroyed as a result of the oil exploitation,” adds Jaff Napoleon Bamenjo of Relufa, which campaigns for environmental justice in Nigeria.

Platform argues that “a significant amount of Shell’s funding appears to have been channeled via senior military officials” which provides “ample opportunities for corruption”.

US cables, released by WikiLeaks in 2010, alleged that the company paid hundreds of thousands of pounds towards the deployment of 350 soldiers in the delta in 2003.

Shell plays down the accusations, by arguing that “Protecting our people and our assets is Shell’s highest priority. Our spending on security is carefully judged to meet this objective, wherever we operate in the world. All our staff and contractors are expected to adhere to the highest levels of personal and corporate ethics, as set out in our code of conduct.”

However, even Shell insiders are claiming that this is a waste of money. One Shell manager told Platform: ““the amount of money we are spending on these soldiers, if we take 10 per cent of it and spend it on the communities, then when they wake up every morning, they will say ‘Shell, it will be well for you’”.

Well Shell it is time to “make it well” for the communities in which you operate. You only have sixty years of mess to clean up.