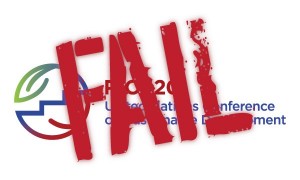 First the gloss from Rio. This was the UN’s largest ever conference with 45,300 delegates from more than 180 nations.

The UN says it has obtained pledges worth $500 billion from governments and companies for projects aimed at reducing the strain on the planet’s resources.

There are nearly 700 commitments from governments to supposedly cut fossil fuel use, boost renewable energy, conserve water and alleviate poverty.  There are 49 pages of recommendations.

“These huge numbers give a sense of the scale and growth of investment going into sustainable development,” the UN Secretary-General Ban Ki-Moon, said at the close of the conference. “They are part of a growing global movement for change.”

The US Secretary of State Hillary Clinton was equally upbeat about the conference. “A more prosperous future is within our reach, a future where all people benefit from sustainable development no matter who they are or where they live.”

Indeed, the conference document was entitled “The future we want” , conjuring up images of hope and progress.

Then there is the bone-crunching reality.

All the commitments are voluntary. The document is non-binding. The final text is vagueness personified with 147 “recognises,” 59 “reaffirms,” 49 “encourages,” and only six “adopts” and five “decides”.

The reaction has been one from scathing to ridicule.  Felix Finkbeiner, of the children’s initiative Plant for the Planet, called the recommendations “a long, 49-page blah . . . a slap in the face for all children of this world”.

Jim Leape, Director General of the Wildlife Fund, said it was “a colossal failure of leadership and vision from diplomats.”

“Our final document is an opportunity that has been missed. It contributes almost nothing to our struggle to survive as a species,” added the Nicaraguan representative Miguel d’Escoto Brockmann “We now face a future of increasing natural disasters.”

Barbara Stocking the head of Oxfam said: “Rio will go down as the hoax summit. They came, they talked, but they failed to act. Paralysed by inertia and in hock to vested interests, too many [world leaders] are unable to join up the dots and solve the connected crisis of environment, equality and economy.”

The summit failed to offer firm commitments to eradicate fossil fuel subsidies, something criticised by Oil Change and many others. Daniel Mittler, political director of Greenpeace  said: “They spend $1 trillion a year on subsidies for fossil fuels and then tell us they don’t have any money to give to sustainable development.”

Trócaire director Justin Kilcullen also attacked the inaction on subsidies, as well as inaction on a global levy on financial transactions “which could generate billions in revenue each year to eliminate poverty and tackle climate change.”

When the French NGO La Ligue de L’Enseignement invited delegates to answer the question, What will our children remember of Rio+20? The response ranged  from “UN captured by corporate states” to simply “bullshit”.

As the German daily Süddeutsche Zeitung wrote in an editorial: “The Rio+20 conference, which really should have provided a new spark, has instead shined the spotlight on global timidity. Postpone, consider, examine: Even the conference motto — “The Future We Want” — sounds like an insult. If this is the future we want, then good night.”

The answer, in the end, was neither.