This Congress is on track to be the dirtiest ever. Since 1999, Dirty Energy Money flowing into Congress in the first year of the election cycle has increased 70%, reaching nearly $16 million in 2011. See Figure 1. 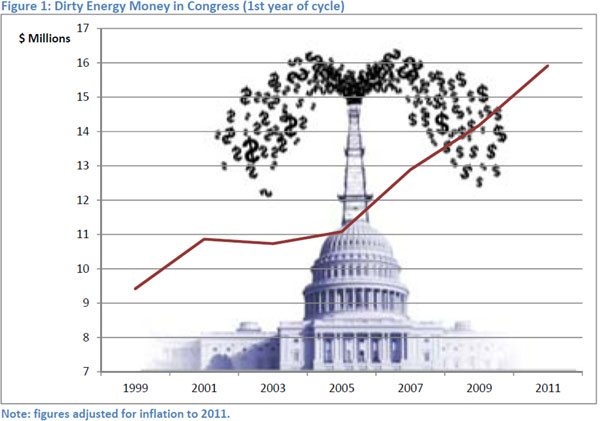 But where’s the rest of the money?

While our database normally tracks money from companies directed to sitting members of Congress, this is only a portion of what these companies spend to influence American politics.

When we include money spent on congressional candidates who lost elections, presidential races, and the money flowing into Super PACs that cannot go directly to candidates but funds ads and campaigns, giving us a better picture of how much money these companies spend.

In the current cycle (since January 2011) dirty energy companies have spent at least $43.5 million on influencing federal elections in America.

This means that dirty energy companies spend at least $96,000 every day on corrupting American democracy.

This does not include money spent on state and local elections or money spent on lobbyists, which is more opaque and potentially adds millions more. Additionally, a lot of Super PAC money is opaque and tactics such as setting up companies to donate large sums to a Super PAC and then disbanding the company have been reported. We therefore believe that dirty energy players are likely channeling a lot more money into the process that we have tracked here.

But it doesn’t end there.  The biggest spending of this cycle is still ahead of us.

A quarterly analysis of the money flowing to incumbent members of Congress clearly shows that in the period leading up to an election, in the third quarter of the second year of each two year cycle, contributions are always greater than in any other quarter in the cycle (see Figure 2). 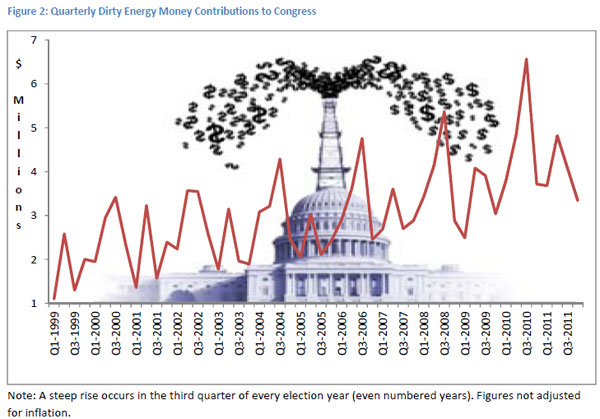 Dirty energy money in the third quarter of 2010 was the highest for any preceding quarter going back to 1999. And as the Financial Times wrote this week, the American oil and gas industry “is mounting its biggest-ever campaign to influence the November presidential election”.

This cycle’s spending is clearly on track to break all previous records. The industry is outdoing itself in a desperate bid to prime the system so that it gets everything it wants. It’s clear this is no way to run a democracy.

The only question is how high will the figures go?

Unfortunately, industry gets such a good return on its investment, at least 5800% at our last count, that the sky is the limit.

To find out how much money your Congressional Representatives take from fossil fuel interests, visit DirtyEnergyMoney.com