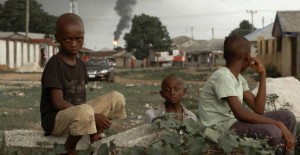 And so it goes on. It might be a different day but the ongoing vortex of violence, pollution, protest and conflict continues in the Niger Delta.

The oil giant, Shell is at the middle of this vortex, as it has been for decades, with the company unwilling to take adequate steps to stop the violence or pollution. So the protests continue.

Reuters is reporting that there were two fresh oil pipeline leaks in the Niger Delta on Monday, three days after the company declared force majeure on exports of Bonny Light crude due to outages caused by oil theft.

Last year a UN report criticised Shell and the Nigerian government for contributing to 50 years of pollution in Ogoniland, the home of the executed writer Ken Saro-Wiwa.  Ken was murdered by the Nigerian military for campaigning against Shell.

The latest spills come as the Oscar-nominated actress Sophie Okonedo, known for films such as “Mrs. Mandela”, “The Secret Life of Bees” and “Hotel Rwanda”, was among professionals who appeared in a two-minute film, called Livelihoods, produced by Amnesty International.

The hard-hitting film calls on Shell to take responsibility for its actions in the Niger Delta. Depicting various individuals’ work being ruined by oil, it has oil dripping from Okonedo’s lips.

The film was released at the end of last month with Amnesty aiming to get at least 10,000 signatures in the UK at least against Shell. Amnesty International UK’s Director Kate Allen said: “What we’re seeing unfolding across the Niger Delta is nothing short of a human rights catastrophe, and this has inspired Sophie Okonedo and several others to join Amnesty’s campaign calling on Shell to clean up and pay up.”

Allen continued: It is time Shell cleaned up their mess and adequately compensated the people of the Niger Delta,”

Amnesty is not the only organisation targeting Shell over its pollution. Friends of the Earth Netherlands/Milieudefensie, has created another campaign called “Worse than Bad”  which also is campaigning to hold Shell accountable for their reckless pollution in the Niger Delta.

“Over the last 50 years Shell has helped turn the Niger Delta into the world’s largest oil spill,” argues FoE. “There has been no serious clean up effort, no relief for the millions of people that live there, nothing. The tiny efforts Shell makes serve only as window dressing, and are not a real attempt to solve the problem. The situation is still getting worse everyday.”

This campaign is trying to convince the world of the severity of the situation in the Niger Delta, and is demanding immediate action from Shell to take finally responsibility for the pollution they’ve caused.

The two campaigns come as  a new video has emerged that shows the Managing Director of Shell Nigeria, Mutiu Sunmonu, speaking at a conference where he conceded that Shell could have employed “warlords” in the past.  “There could be cases in the past where you have thought you were employing, you know, a genuine, bona fide contractor, and yet he is probably a militant or a warlord” said Sunmonu. “So I will not argue that such a situation, you know, could have arisen in the past.”

Another piece of the evidence that shows Shell is the vortex destroying the Delta. The vortex will continue until enough pressure is put on Shell to clean up its mess. So go here and here to act.