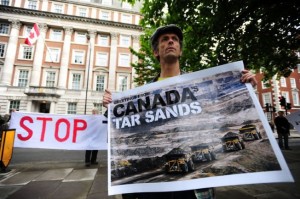 One of the dirtiest and diplomatically-brutal PR campaigns ever witnessed in Brussels has once again paid off.

At the end of last week, the EU finally buckled to Canadian arm-twisting and delayed the introduction of the long awaited Fuel Quality Directive, which is designed to reduce carbon emissions from transport fuels.

The European Council – the EU body that represents individual countries – was set to vote on whether to pass the directive in June, but has now delayed the decision.

At the end of last week, EU officials announced they will now conduct an impact assessment into the proposals. This would now delay any implementation until early 2013.

The move was immediately welcomed by Joe Oliver, Canada’s Minister of Natural Resources, who added “we remain strongly opposed to Canadian oil sands crude being unfairly discriminated against.”

Meanwhile, EU officials were trying to put a brave face on it: “The Directive will be presented to the Member States in the Council before early 2013 with an even more solid basis for decision,” argues Isaac Valero-Ladron, Climate Action Commissioner Connie Hedegaard’s spokesperson.

So months more delay is exactly what the Canadian government and its oil industry allies have long campaigned for.

In many ways they have implemented a key public relations 3-D campaign, reminiscent of the tobacco industry in its fight against smoking and oil industry in its campaign against climate change. Firstly is to deny there is a problem, secondly to delay any regulatory action and thirdly to dominate any policy response to the problem.

The Canadians have waged an extremely effective campaign from the start, blustering bullying, and manipulating the truth over the true impact of the dirty tar sands.

For more on this go here.

This week, further evidence emerged that rebutted the Canadian’s spurious claims. A study released by the European environment group, Transport and Environment, found the FQD would add one Euro cent to the average price of each barrel of oil.

Environmental groups were also trying to make the most of the decision. Hannah McKinnon, campaigns director with Climate Action Network Canada, said the delay will give EU officials more time to combat the “massive” lobbying effort from Canada.

But it will be the Canadians who will be the happiest, having delayed the FQD’s implementation once again.