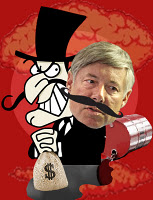 There may be no better example of the corrupting influence of Dirty Energy Money in the current Congress than Supercommittee member Representative Fred Upton of Michigan.

In July Upton warned of the dangers of private lobbying organizations and special interests “operating in an increasingly competitive lobbying realm in Washington—a world where getting on the agenda often requires hefty financial resources and clever political strategies.” These organizations “slow real progress toward cleaner air and water” and “produce[s] gridlock and hardened positions in Congress rather than common ground.” He was talking of course about the environmental movement rather than his dirty oil, coal and electric utility donors.

It was not always so with Fred Upton. As recently as April 2009 Upton stated that “Climate change is a serious problem that necessitates serious solutions.” But by November of 2010 he was saying that there is “no real science” that supports climate policy. A month later he was arguing against EPA efforts to regulate carbon and other greenhouse gases as “an unconstitutional power grab that will kill millions of jobs”. The move to regulate these gases “presumes that carbon is a problem in need of regulation. We are not convinced.” he wrote with Tim Philips, the president of Americans for Prosperity, a Koch Brothers- funded front group.

Upton’s ascent to the Chairmanship of the powerful House Energy & Commerce Committee and the flow of dirty energy campaign cash that entails may certainly help explain his recent change of heart. Not that he previously rejected such dirty energy contributions. Far from it. Since 1999 Upton has accepted at least $660,600 in dirty energy money from the oil, coal and gas industry in the form of campaign contributions. His top dirty energy contributors have included Michigan utilities CMS Energy ($70,200) and DTE Energy ($62,100), as well as Valero ($20,000) and Exxon Mobil ($19,500). Koch Industries is another significant donor to Rep. Upton.

According to Payback Time, a recently released report from Oil Change International and Public Campaign, Koch Industries has given $25,000 directly to Upton’s campaign committee and another $40,000 to his leadership political action committee over his career.

But since assuming the Chairmanship of the Energy & Commerce Committee his fundraising from dirty energy companies has greatly accelerated. In the first three quarters of 2011, according to Payback Time and Public Campaign, Upton has accepted at least $284,900 from the energy sector, nearly half of what he raised in the previous 12 years. Contributors include Southern Company, and the PACs of the American Petroleum Institute, Chevron, ConocoPhillips, Koch Industries and Halliburton. He has also stacked the Committee with fossil fuel industry lobbyists, including Maryam Brown who comes to the Committee by way of ConocoPhillips.

The fossil fuel industry is certainly getting its money’s worth. Aside from presiding over the constant barrage of attacks on the EPA by the Energy & Commerce Committee,  designed to weaken and strip its regulatory authority, Upton has championed the Keystone XL Pipeline. The pipeline would carry dirty tar sands oil 1,700 miles from Alberta to Texas so that it can be refined into diesel and exported to Europe and Latin America tax free. His support has included the ludicrous statement that the pipeline would “create 100,000 jobs” (5 times more than even the builder Transcanada has claimed), while the only independent study that has been done so far finds that permanent job creation will be negligible or even negative.

Upton’s cheerleading for the pipeline seems particularly odd given what his constituents have faced since theEnbridgeoilspill in the Kalamazoo River in July of 2010, where 1.1 million gallons of tar sands oil has been recovered at a cost of over $36 million, with cleanup expected to last well into 2012.

Not surprisingly, Rep. Upton has voted in favor of massive government handouts to the fossil fuel industry in the form of subsidies and tax breaks. He has even gone so far as to suggest that the Supercommittee should focus on increasing oil and natural gas drilling in the United States in order to help tackle the deficit. Oh, and did we mention that Upton also has a personal financial interest in the success of the fossil fuel industry? According to Payback Time, Upton and his immediate family have up to $720,000 in dirty energy investments, including substantial holdings in Chesapeake Energy and Exxon Mobil.

Click here to write Fred Upton and demand that the Supercommittee must include cuts in fossil fuel subsidies in its recommendations to Congress. If you’re near Kalamazoo or St. Joseph/Benton Harbor, stop by one of his offices and let his staff know in person. While you’re at it pick up the phone and call his DC office at (202) 225-3761.