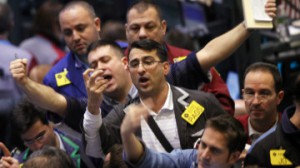 One of the political mantras of those old boys at the American Petroleum is that if the gas price is too high it means we have to drill for more oil.

Plain and simple. Its good old fashioned economics: supply and demand. If the price is too high, we must be faced with a physical shortage.

Whilst the oil price does of course somewhat reflect supply and demand of physical oil, there are other factors at play with the oil price and one of those is speculation. Traders make millions every day betting on the price of oil, and the future price of oil and whether it will go up or down.

Such is the power of these trades that the bottom line is that speculators can push up the price of oil, quite easily.

Many politicians are trying to reduce the price at the pumps to ease the pain of consumers, but this is not going to happen any time soon.

Goldman Sachs, the massive controversial investment bank, is one of the world’s largest commodity traders. Yesterday, the bank advised its clients that the small dip in oil prices since the beginning of the month meant it was a great time to buy oil again. It’s a “good entry point for long positions” said the bank.

If all Goldman’s clients start buying oil, expecting the price to rise, its becomes a self-fulfilling prophecy and the price will rise.

And guess what, after Goldman’s gamble yesterday the price of oil rose. Brent crude, the benchmark, increased $2.43 to $112.53 a barrel. And the money men from Goldman made loads of money. So you will pay more at the pump.

Most of the time the authorities seem completely impotent in their attempts to reign in this flagrant speculation, but yesterday the US Commodities Futures Trading Commission (CFTC), the domestic regulator charged a trading house and two individuals with manipulating oil prices back in wild days of 2008, when oil reached records highs of $147.

Despite the blatantly obvious that many traders were making millions seriously manipulating the oil market, this is only the second time the US CFTC has brought an oil manipulation case since it launched its “nationwide crude oil investigation” three years ago.

The regulator alleges that a US trader Parnon Energy, together with its Swiss and UK affiliates Arcadia Energy (Suisse) and Arcadia Petroleum, made more than $50m from a scheme that amassed dominant positions in the physical market that created the impression of a shortage of oil in early 2008.

The CFTC complaint alleges that the over-buying by the traders created the impression of a shortage and pushed up the price of the oil-futures market.

It alleges that the traders “unlawfully manipulated and attempted to manipulate” the West Texas Intermediate – known as WTI-  which is the US benchmark for crude, just like Brent is the UK benchmark.

“The scheme artificially increased the price of crude oil physical, derivatives and other oil products in the United States and elsewhere.”

“They wanted to lull market participants into believing that supply would remain tight,” the CFTC said. “They knew that as long as the market believed that supply was tight and getting even tighter, there would be upward pressure on the prices of WTI for February delivery relative to March delivery, which was their goal.”

After cashing in the profits from betting on their futures positions, the traders opened “short” positions  that would profit from a drop in prices.

The emails outlined in the case are illuminating: In September 2007, one of the traders, James Dyer indicated to other traders in an email that there is a “shitload of money to be made shorting”.

In another email with the same colourful language, one of the traders said the dumping of oil into the market, which he described as an “inevitable puking” was having the “desired effect”.

Whatever happens with this case, we know that unless the CFTC takes widespread action against excess and reckless speculation then the price of oil will continue to be at the mercy of the money men and not the oil men.