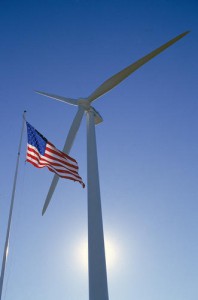 The last time that America’s pro-wind lobby came together for its regular get-together was in California in 2007.

That time there were 5,000 attendees and the installed wind capacity in the US was 17 gigawatts.

Four years later and on the surface it is a success story for America’s pro-wind lobby. Yesterday saw the opening of “Windpower 2011” Conference where an estimated 20,000 will attend – that’s four times as many people as last time.

Four years on from the last conference, the U.S. now has a cumulative installed wind power capacity of over 41 gigawatts, with wind providing 2.3 per cent of the nation’s electricity.

The banner headline is that the US is now the world leader in wind energy, with enough capacity supply electricity to over 10 million American homes.

The pro-wind lobby argues that the reason wind has been so successful is that investors are choosing wind over nuclear or coal.

American wind energy was picked to provide 35 percent of new U.S. power capacity over the four-year period after 2007, second only to natural gas.

But the dash for dirty shale gas is actually now undermining new wind, according to some in the industry.

And so flip the coin and you get a very different story:

Construction of new wind farms in the US is set to decline next year because of competition from cheap natural gas for power generation, the country’s largest developer of new wind power projects has said.

According to Ignacio Galán, chief executive of the Spanish energy group Iberdrola, the largest developer of wind in the US, the rise in shale gas was changing the energy dynamics, by increasingly driving down prices of gas. “Shale gas makes the production of electricity from other sources not attractive enough,” he told the FT.

Wind may be increasing, but the rate of that increase is now declining. Installations of new wind capacity in the US dropped from 10,000 megawatts in 2009 to 5,100MW last year.

Galán argues that a further 5,000MW could be added this year and perhaps as little as 3,000MW next year.

All in all some 10,000 jobs were lost in the industry last year.

So is it all bad news?

Although shale gas deposits are making natural gas cheap right now, “nobody expects that to last, not even the people in the natural gas industry,” he argues.

Concerns over fracking will soon increase prices, he believes.

And even, fiscally-conservative Republicans, currently in charge in Washington, may not reign in the planned wind expansion. “The wind blows hardest in the red states,” Kelley told the Greentechmedia website.

“Most of our industry is probably Republican, like any other manufacturing industry,” he argues, adding, “Everybody needs to plug things in.”