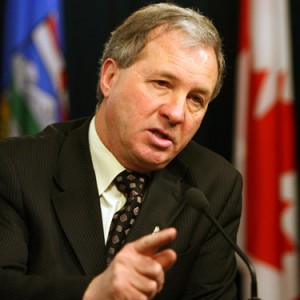 Alberta’s minister of energy Ron Liepert was in New York this week and took the opportunity to threaten the State Department over the slow pace (as he sees it) of the approval process for the Keystone XL pipeline.

The pipeline is designed to carry up to 900,000 barrels per day of mostly tar sands derived crude oil from Alberta to the Texan gulf coast.  The State Department has been considering the application and the ‘delays’ are mostly due to the EPA rejecting the original environmental impact assessment as inadequate and continued opposition along the pipeline route.

Liepert told journalists at an energy investment conference in New York that when it comes to the tar sands, China “will take every drop we are able to produce in a heartbeat”.

Nothing could be further than the truth and the State Department should frankly feel insulted by these hollow threats.

Firstly, it will take more than a heartbeat to deliver tar sands oil to China because there is no infrastructure to deliver it there. A $5.5 billion pipeline (Gateway) has been proposed by Enbridge to transport the toxic bitumen to Canada’s pacific coast but its chances of realization are pretty remote no matter how desperately the oil industry and Alberta’s politicians want it.

British Columbian first nation groups are vehemently opposed to the pipeline and just last week demonstrated the strength of their opposition at Enbridge’s annual meeting. The groups have so far resisted a $1 billion benefits offer which some say has only served to strengthen their resolve.

Because British Columbia lacks clear treaties and land settlements with first nations the legal process to obtain access across the province is fraught with obstacles. Canada’s former federal minister for Indian Affairs, Jim Prentice told the Globe & Mail recently, “One of the great public policy failures in Canadian history was the failure to actually execute land and claim treaties and, in a sense, land titlement, in British Colombia over the course of the last 150 years. (…) And so the reality on the ground is that the constitutional and legal position of the first nations is very strong”.

So no quick and easy resolution to the tar sands access to Asia problem there then.

Added to that is the question of whether China really is so desperate to obtain tar sands oil. A recent article in the Petroleum Economist suggests (subscription only) that a new pipeline from Russia to China is in direct competition with Canada’s oil. And it’s already delivering. Added to that is the new corridor China is opening up through Myanmar (Burma) which will shorten the route from the Middle East and Africa to Chinese markets.

None of these developments are pretty but the fact is they are happening while Gateway faces years of legal battles before it can even consider breaking ground.

Questions also remain unanswered about whether Enbridge has yet demonstrated that there is demand in Asia to justify the pipeline.

With all of these questions hanging over the Gateway pipeline and the market for tar sands oil in Asia, Lieperts threats ring hollow. There is no need for the State Department to rush to any decision. Especially when U.S. citizens, including farmers whose land the pipeline would pass through, have concerns that remain unaddressed. The fact is the case for XL remains far from clear.

If Canada wants to continue to be viewed as the ‘friendly neighbor to the north’ then I suggest it stops trying to bully its southern buddy with threats that it cannot deliver on.