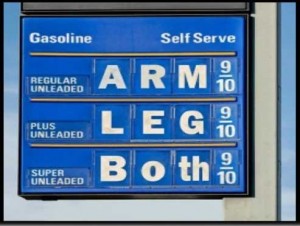 Until Sunday night one of the main talks of the town in Washington was gas prices.

Now the talk of the town is Bin Laden’s death. Oh and gas prices.

Because the issue of high gas prices is not going away any time soon. A 36 per cent rise in the last year put pays to that.

Nor is the issue of subsidies to Big Oil going to die any time soon.  Indeed, just last week, House Minority leader, Nancy Pelosi wrote that “As Americans struggle with the price at the pump, oil companies are enjoying multi-billion dollar profits.”

During his weekend radio broadcast on Saturday Obama said: “While rising gas prices mean real pain for our families at the pump, they also mean bigger profits for oil companies. This week, the largest oil companies announced that they’d made more than $25 billion in the first few months of 2011 – up about 30 per cent from last year.”

Obama continued that he had a “problem with the unwarranted taxpayer subsidies we’ve been handing out to oil and gas companies – to the tune of $4 billion a year. When oil companies are making huge profits and you’re struggling at the pump, and we’re scouring the federal budget for spending we can afford to do without, these tax giveaways aren’t right. They aren’t smart. And we need to end them.”

Big Oil and its supporters will argue that gas prices will come down if there is more domestic drilling.

And this week, E&E notes that the House will debate two offshore oil and gas drilling bills from the Republican Doc Hastings, the Natural Resources Chairman Doc Hastings which would speed up permitting in the Gulf of Mexico and force the Interior Department to hold lease sales in the Gulf of Mexico and off the coast of Virginia that were either cancelled or delayed in the aftermath of BP’s Deepwater Horizon disaster.

Republicans and Big Oil will argue that we can drill our way to lower gas prices. But that is a false hope. And a lie. The US is part of the global oil economy. And as the Financial Times reports this morning the US has become a net exporter of fuel.

So whilst American motorists are struggling at the pumps, oil is being exported as the US has become a net exporter of oil for the first time in 20 years.

What is more it is often more profitable to export oil rather than sell it domestically. So the bottom line is the more the US drills, the more that will be exported. And domestic prices will remain high, as long as the tension in the Middle East continues to be exploited by speculators. That is what is pushing up prices.