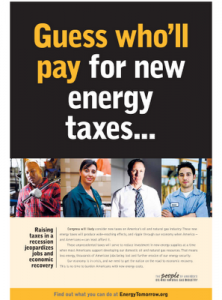 Any regular reading of this blog will know that that the good old American Petroleum Institute (API) is fairly wizard-like when it comes to conjuring up numbers of how many people the industry supports or employs.

Up to September 2009, the API had often repeated statements such as “The oil and gas industry employs nearly 1.8 million Americans and supports another 4 million jobs.”

But after that, the lobby group started using a figure of in excess of 9 million. The statisticians from the oil industry had waved a magic wand and invented 3 million people.

Even Harry Potter would have been proud of that trick.

The reason the extra 3 million mattered was that the message was simple – tax the industry and you threaten all these jobs.

Now the API has gone further and yesterday published a report that argues that if you tax the industry you hurt all the people who invest in oil in their pensions.

We know that many mainstream investment funds invest in oil – they forget about the awkward issues of climate change, pollution and the resource curse and invest away.

So the API is now saying if you tax us you will hurt firefighters, police officers and teachers and all those public sector workers, whose pensions invest in oil.

“The oil and natural gas industry supports millions of jobs and a significant portion of our economy, and the retirement benefits of America’s teachers, police officers, and thousands of others with a pension or 401k.” argued the API, after releasing its new study yesterday.

People generally have more empathy and respect for teachers and or Police officers than Big Oil, so this is a classic PR campaign that tries to gain credence and acceptability through association.

A fire-fighter saving lives or a teacher teaching your kids is very different from the imagesof the Deepwater Horizon.

But once again the underlying message is the same: Back off Big Oil when it comes to taxes.

“Increasing taxes on the industries by billions of dollars a year while locking up many of the best domestic energy prospects will not help keep companies strong,” Kyle Isakower, API vice president of regulatory and economic policy told E&E News. “These types of policies may well result in companies investing less, hiring less and earning less.

“That would hurt their financial performance and harm not just state pension funds and the Americans that depend on them, but the millions of others Americans who also own shares of these companies through mutual funds, IRAs and 401(k)s,” Isakower said.

The API plans to show its new research to Congress and the White House, in its latest move to try and fight off any tax changes.

But the oil industry’s critics think the latest move is “ridiculous”.

“It’s the most ridiculous argument I’ve ever heard to justify subsidies for an industry,” Steve Ellis, vice president with Taxpayers for Common Sense told E&E News. If pension funds also hold Microsoft or Intel stocks, he said, “does that mean the government should turn around and should subsidize Microsoft or Intel to boost the pension funds?”

“It’s really a preposterous sort of proposal,” Ellis added. “It makes no sense from a public policy standpoint.”