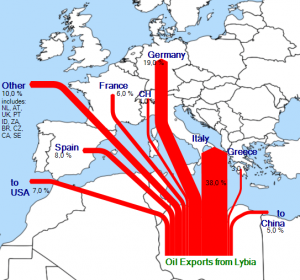 At one point yesterday, Brent crude, the European benchmark grade of oil was topping $108 a barrel—its highest level in 2½ years.

Such is the surge in oil prices caused by the Libyan crisis that it could derail the global economic recovery according to Fatih Birol, the International Energy Agency’s chief economist.

Analysts argue that any oil trading at over $95 to $100 causes economic damage and slows the international economy.

What makes Libya so different to the other countries that have witnessed political turmoil is that it is the first major oil exporter to be engulfed by the crisis – it exports 1.6m barrels a day – and the first to see significant disruption to oil production.

Traders are getting jumpy at the thought that the unrest will spread: “This is potentially worse for oil than the Iran crisis in 1979,” argues Paul Horsnell, head of oil research at Barclays Capital. “That was a revolution in one country, here there are so many countries at once. The world has only 4.5m barrels-per-day (bpd) of spare capacity, which is not comfortable.”

Libya is the world’s 12th largest oil exporter and a critical supplier to European countries as it is seen as good quality crude. Italy, Germany and France imported last year more than half of Libyan oil.

The big one of course is Saudi Arabia. Although analysts are arguing the Kingdom is unlikely to face the kind of protests currently being seen in Egypt and Libya in the short-term, in the longer term things could be different.

And if Saudi oil was switched off, even for a short-term, the world economy would face chaos.

What is hard to escape is that less than two years after the last “energy crunch” we could be facing one again.

And although the oil is likely to keep flowing in the short-term, political uncertainty does nothing for long-term investment. “It matters a lot what the investment climate is for long-term fixed capital projects,” argues Paul Horsnell, from Barclays Capital.

The political turmoil will be a particular worry for BP and the British government that courted Colonel Gadhafi in the face of heavy political criticism.

In 2007, BP signed a $900 million deal with Libya, its biggest exploration commitment ever.  The BP transaction -struck by Gadhafi and then U.K. Prime Minister Tony Blair – became known as “The Deal in the Desert.”

It carried significant risks for both company and the British government.

Whether the release of the Lockerbie bomber – Abdelbaset Mohmed Ali al-Megrahi – was part of the deal has dogged the British government over the last eighteen months.

Italy’s ENI SpA, the biggest producer in Libya with about 244,000 barrels a day, said it was evacuating all nonessential staff and their dependents.

One oil executive went as far to tell the Financial Times that he was busy evacuating his staff. “The last man will switch off the button,” he told the paper.

Such is the extent of the crisis, that officials from more than 90 nations, including Saudi Arabia’s oil minister, Ali al-Naimi, and U.S. Deputy Secretary of Energy Daniel B. Poneman, are meeting today in Riyadh, Saudi Arabia, to discuss the fluctuating oil price and political turmoil.