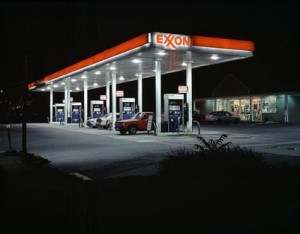 When the history of the hydrocarbon age is written, the one company that will personify Big Oil more than any other will be Exxon.

Yes, there are other oil majors like Shell and BP, but they are like young pretenders to the Oil King.

Exxon is the company that has bet its future on oil, while the others have at least dabbled in renewables or, in part, made the dash for gas.

In order to prolong the hydrocarbon age, Exxon has funded one of the most sophisticated corporate public relations strategies to undermine climate science. This is a company that will do anything for the black stuff.

But the worrying fact for the boys from Houston is that they are struggling to find new oil.

You can’t have an oil king without oil.

But the facts speak for themselves.  In its latest annual financial report, the company said that for every 100 barrels it has extracted over the past decade, it has replaced only 95.

The bottom line is that it is replacing less than it is producing.  So the company does not have a 100% reserve replacement rate.

And for a business that is based on oil, that must be a real worry.

So Exxon has had to fill its black hole somehow. The company concedes it made up for the shortfall by stocking up on natural gas, mostly through its acquisition of XTO Energy Inc. It is only via this acquisition that Exxon could claim to hit a 100 per cent reserve replacement rate.

Indeed Exxon’s takeover of XTO Energy accounted for a whopping 80 per cent of the reserves it added in 2010.

Barclays Capital noted that excluding the XTO acquisition, Exxon’s reserve replacement ratio would have been only 45 per cent.

Many analysts and critics are arguing that Exxon’s annnoucement reflects the fact that oil is harder to find. “The good old days are gone and not to be repeated,” says Fadel Gheit, an analyst with Oppenheimer and Co.

The bottom line is that Exxon now has more natural gas in reserve for future production than oil.

The other bottom line is that oil majors like Exxon are running out of places to find new oil, meaning they have to exploit the dirty tar sands in Canada, or reserves in deep water.  But BP knows how hard that last one can be.

To anyone tracking the industry, therefore, Exxon’s announcement is not a surprise. Only last month Oil Change International warned about how the majors were finding it more difficult to replace their reserves, filling the gap with tar sands oil.

The report found that at least four of the top six IOCs – including Exxon of course – have significantly relied on tar sands reserves additions to support their reserve replacement rates (RRR) in the past five years. As a percentage of total liquids additions, tar sands represents a massive 51 per cent of RRR for Exxon. Check out the report here.

The report concluded: “The international oil industry has entered an era in which maintaining production numbers involves unprecedented risk, escalating costs and tighter margins. Adequate profits from equity production will increasingly depend on a high demand and high oil price environment which is not only far from assured but is also counter to the interests of energy security and climate protection.”

Exxon and the other IOCs will take ever greater risks to find oil. But all the indications are the easy reserves of oil are running out.

This means that the history of the hydrocarbon age might be written sooner than we all thought. And the last chapters are likely to be dirty and dangerous.