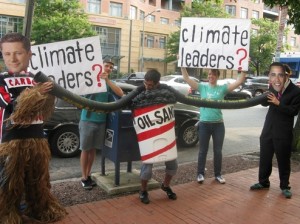 When Canadian Prime Minister Stephen Harper met Barack Obama at the end of last week he asked the American president to support a highly controversial $7-billion pipeline that could double the amount of dirty tar sands that could be exported to the United States.

TransCanada’s proposed Keystone XL pipeline has been on hold since last July, when the U.S. EPA described a draft environmental study of the project as “inadequate”.

During the two hour meeting at the White House, Harper confirmed he pressed Obama on Keystone. “Yes, we did discuss the matter you raised,” Harper told waiting journalists.

Harper said he impressed on Obama the “reality” that the U.S. will need far more oil than it can produce for “some time” to come. I.e. get your dirty oil from us.

There are other predictable actors weighing into the tar sands debate. Jack Gerard, president of the American Petroleum Institute, wrote to Obama on Friday asking him to approve Keystone XL for economic reasons.

I have blogged many times before how Gerard likes to inflate his figures on the importance of the oil industry, but the ones he came up with this time are that the pipeline could create 342,000 direct and indirect jobs between 2011 and 2015.

But worryingly America’s influential media are also weighing into the debate. Over the weekend the Washington Post ran an editorial entitled “Say yes to the Keystone pipeline.”

In a kind of contradictory editorial the paper argued that “Oil sands crude is nasty, and the sooner the world stops burning it, the better.”  So far so good.

It added: “The oil’s extraction produces loads of greenhouse gases; the stuff is 82 percent dirtier than more traditional oil, according to the Environmental Protection Agency.” Getting better.

But having said this, the paper then said: “But that’s actually not much of a reason to kill the pipeline.”

The paper points out “there’s already plenty of unused pipeline capacity running into the United States”, so stopping a pipeline will not actually affect tar sands production until after 2020.

The paper argues environmentalists are misguided by building an anti-tar sands movement and that they should do more to reduce oil demand.

“The underlying evil here” argues the paper, ” is not that Canadian oil companies want to sell their product for the world market price – a privilege anyone who believes in “fair trade” should accommodate and one that market forces beyond America’s control will see to eventually. (Why, anyway, wouldn’t environmentalists be happy about higher oil prices?) The Energy Department report makes clear that the real way to reduce emissions resulting from the burning of oil extracted from oil sands and other sources is simply not to burn it – that is, to lower demand for the stuff.”

It is actualy a no-brainer that we all want a reduction in the demand of oil. But by building more oil infrastructure this will only encourage more production to exploit the under-used capacity in the pipe-line. And this means more tar sands shipped to the US. And hence more pollution.

And that is the point the Post does not seem to understand.