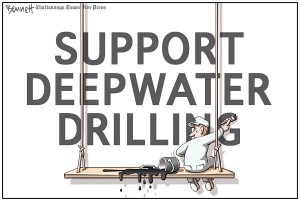 The oil industry may be arguing that its back to business as usual after the Deepwater Horizon blowout, but the disaster is still causing major ripples within the investment community.

And now the shareholders – who together represent investments of $2.5 trillion – are coming together to force through further changes.

They are arguing that oil companies operating in deep water must do much more to reassure the investment community they are not taking excessive risks that could put them out of business.

As if to prove their point, BP said earlier this week it expected the spill to have cost it $41bn. Although the oil giant has enough financial assets to offloard to be able to absorb this huge amount, many smaller operators would not be in such a position.

The shareholders are from the US and Europe, who include state employees’ pension funds from California, New York, Florida and the UK, are arguing that oil company boards must improve safety performance and disclosure.

The initiative is co-ordinated by Ceres, the ethical investor network.

Andrew Logan, Ceres director for oil and gas, said the cost of the Deepwater Horizon disaster had brought home to investors the potential financial impact of poor safety performance.

He added: “The cost of getting it wrong has gone up a lot. If you are a company in the deep-water offshore, it is quite like betting the company with each well that you drill.”

Ceres believes that in some areas, particularly the ability to tackle large spills in deep water, the industry’s preparedness has improved, with the plan for a new spill response company.

In others, however, “there is still a lot of work that needs to be done,” including better evaluating the risks they are undertaking, being more transparent about decision making, and linking executive pay more closely to safety performance.

As if to emphasis the risks of deepwater drilling, the US company Hess has admitted that over 180 million gallons of oil could spill into the sea off Shetland in Scotland.

The oil could spread hundreds of miles away as far as the coast of Norfolk in Eastern England if there was a blowout, affecting huge parts of Eastern Scotland and England.

A spill could last for more than 10 weeks or so and involve almost as much oil as was lost from the Deepwater Horizon.

Will the industry listen or learn though?