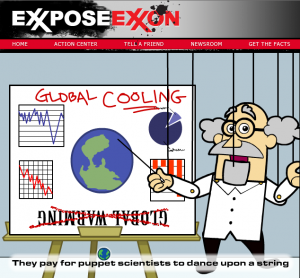 At the same time it appears that big oil and coal climate denial campaigns are successfully stifling climate action in Congress and the Obama Administration, a group of America’s top scientists stepped up to the plate on Tuesday and called on House and Senate leaders to “take a fresh look at climate change.”

And none too soon: News from the oil industry has been grim lately. Both BP and Exxon would have us believe that progress to stabilize CO2 emissions will be insufficient to avoid massive loss of life and other disastrous consequences of climate change.

Keep in mind that these are the same powerful interests behind campaigns to deny climate science, influence politicians, and structure financial markets, rules and public subsidies, in favor of climate-killing policies around the world.

The good news came on February 1, 2011 in a letter to Congress, titled “The Importance of Science in Addressing Climate Change.” The missive was signed by an impressive group of America’s top scientists, including members of the National Academy of Science, winners of the MacArthur “genius” fellowship, and a recipient of the National Medal of Science.

Their messages are important ones that we should hold our politicians accountable to act upon:
“The debate about climate change has become increasingly ideological and partisan. But climate change is not the product of a belief system or ideology. Instead, it is based on scientific fact, and no amount of argument, coercion, or debate among talking heads in the media can alter the physics of climate change.

“Political philosophy has a legitimate role in policy debates, but not in the underlying climate science. There are no Democratic or Republican carbon dioxide molecules; they are all invisible and they all trap heat.”

And, “As with the fiscal deficit, the changing climate is the kind of daunting problem that we, as a nation, would like to wish away. However, as with our growing debt, the longer we wait to address climate change, the worse it gets. Heat-trapping carbon dioxide is building up in the atmosphere because burning coal, oil, and natural gas produces far more carbon dioxide than is absorbed by oceans and forests. No scientist disagrees with that.  Our carbon debt increases each year, just as our national debt increases each year that spending exceeds revenue.  And our carbon debt is even longer-lasting; carbon dioxide molecules can last hundreds of years in the atmosphere.”

One of the best ways to tackle our carbon debt, and our fiscal debt for that matter, is to do away with the billions in public subsidies given to the likes of Exxon and other big oil and coal interests. Write your elected officials today and tell them its time to stop funding the problem, and start funding the solution. We need to build out clean energy at home and abroad and support communities vulnerable to climate change, not old and dying industries.