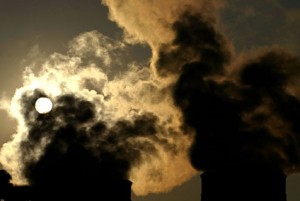 We are on the path to climate chaos, Big Oil has admitted.

Both BP and Exxon have conceded that progress on climate change is totally insufficient to stabilize CO2 emissions.

Both oil companies have just published their Energy Outlooks, and the outlook looks grim.

In a bleak prognosis for success on reducing carbon dioxide emissions, BP admits in its new Energy Outlook 2030 report, which was published yesterday, that global CO2 emissions from energy will grow an average of 1.2 percent a year through 2030.

In total, BP’s chief economist Christof Ruehl predicts “to the best of our knowledge” CO2 emissions will rise by 27pc over the next two decades, meaning an increase of about 33bn tonnes.

BP’s estimate is just higher than ExxonMobil which believes that CO2 emissions will increase by 25% in 20 years, which, according to John Vidal, writing in the Guardian, in effect dismisses “hopes that runaway climate change can be arrested and massive loss of life prevented.”

These projections by BP and Exxon scientists are gloomier than anything publicly expressed by governments and scientists, who maintain that global emissions can be reduced significantly.

Exxon argues that oil will still be king in 2030: “In 2030, fossil fuels remain the predominant energy source, accounting for nearly 80% of demand. Oil still leads, but natural gas moves into second place on very strong growth of 1.8% a year on average, particularly because of its position as a favoured fuel for power generation.

BP too has demand for fossil fuels rising: BP’s ‘base case’ – or most likely projection – points to primary energy use growing by nearly 40% over the next twenty years, with 93% of the growth coming from non-OECD  countries.

There is some good news that energy diversification will continue. Between 2010 to 2030 the contribution to energy growth of renewables (solar, wind, geothermal and biofuels) is seen to increase from 5% to 18%.

The BP report argues that world energy growth over the next twenty years is expected to be dominated by emerging economies such as China, India, Russia and Brazil.

What oil there is left is predominantly under OPEC control. OPEC’s share of global oil production is set to increase to 46%, a position not seen since 1977, the decade that saw the cartel preside over a series of oil shocks and shortages.

In fact, 75pc of all growth in oil reserves over the next two decades is expected to come from OPEC nations, which include Kuwait, Iran, Angola, Libya, Saudi Arabia, Iraq and Nigeria.

Natural gas is also expected to be the fastest growing fossil fuel, with coal and oil losing market share as fossil fuels as a whole experience a slow decline in growth, falling from 83pc to 64pc.

Coal will increase by 1.2pc per year and by 2030 it is likely to provide virtually as much energy as oil, excluding biofuels.

All this does not bode well for climate change, with even Bob Dudley calling the scenarios a “Wake up call”.