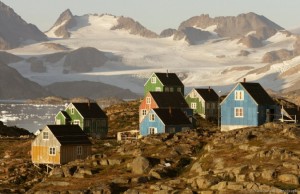 For 300 long years Greenland has been part of Denmark.

Denmark pumps $620 million into Greenland’s anaemic economy every year—more than $11,000 for each Greenlander.

But this may be all about to change. In November 2008 its citizens voted overwhelmingly for increased independence from Denmark, which has officially ruled Greenland in some form since 1721.

The growing calls for full independence have been boosted by the prospects of “black gold” in its sovereign territory.

If you believe the hype there is a lot of oil under Greenland and its seas. The US Geological Survey reported last year that the country could be sitting on reserves of up to 50 billion barrels.

To put that into perspective, the whole of the North Sea produced a total of almost 40 billion barrels since large-scale production began in the 1960s.

So Greenland could have more oil than the North Sea.

But it could not any oil at all.

Nuna Oil, the state oil company, has admitted that the paucity of reliable data meant that “nobody knows if there is any commercial oil at all”

It is the prospect of a massive find that will spur Cairn Energy, to send to rigs to the country later this spring.

Greenland is also said to be receiving “enormous interest” from the oil industry for licensing rounds in 2012 and 2013.

It received a record 17 applications from 12 companies for last year’s tender in the Baffin Bay, including from Cairn Energy Plc, Statoil, Royal Dutch Shell Plc and A.P. Moeller- Maersk A/S.

And if Cairn and the other oil companies are successful then the push for independence will grow.

“The recent discoveries of possible findings of oil have increased the debate on the issue of independence,” Greenland’s Prime Minister Kuupik Kleist, said in an interview last week. “It is a goal and every day we are coming closer to that.”

So the goal is that oil will end nearly 300 years of Danish rule.

Oil is not the only commodity that the country is exploiting. The island’s $2 billion economy derives about half its exports from shrimp. Greenland is also trying to diversity its economy by trying to expand tourism, and other sectors.

However there is a danger that if Greenland goes independent on the back of an oil boom, then the country will become essentially beholden to the oil man.

They might be politically free, but economically tied to a future dependent on one of the world’s dirtiest and most volatile commodities.

Then what happens if the price of oil crashes and Arctic exploration is too expensive?

What happens if there is a major spill in the fragile Arctic waters?

Finally what happens when the oilmen leave in 30-40 years time and the royalties and revenues dry up?

Greenland might soon be free, but at what cost?