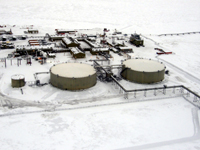 Who would be a BP shareholder?

Last week the company’s shares surged on the fact that the National Commission into the Deepwater disaster had not provided clear evidence of BP’s “gross negligence” into the spill.

It could have been construed that the New Year was the beginning of a new chapter in the company’s ragged fortunes.

But that was then. This morning the company’s shares slid nearly 2.5% after the company shut the Trans Alaska Pipeline (TAPs)– in which it is the majority shareholder – after a yet another spill at a pumping station on the North Slope.

Spills are becoming something of a habit for BP.

Whilst this latest incident is a small leak, the company still describes it as “a significant event” and it is not clear how long it will take to restart production. Moreover it will add to the sense of unease about the oil giant’s safety record.

The leak was discovered at Pump Station 1 on the North Slope early on Saturday morning.

Pump Station 1 is at the beginning of the pipeline, that runs from the North Slope to Valdez.

A station line — not the main pipeline — leaked an unknown quantity of crude oil, that has been contained within a building, with no leak onto the tundra, according to Alyeska.

However, state officials believe that may not be true, with some oil escaping onto gravel pads.

Normal production from the North Slope fields averages around 630,000 barrels a day of oil. Because of the spill, production has been cut by 95 percent.

BP, Conoco and Exxon Mobil are the major producers on the North Slope.  BP runs most of the oil fields on behalf of itself and the other leaseholders.

The cause of the leak is being investigated by state and federal regulators, as well as the company itself.

If it is not fixed within a few days, the incident could put upward pressure on oil prices once more.

It will also add to the damage to BP’s already tarnished reputation.